On September 6, 1881, the skies over Massachusetts turned a burnt yellow, and obscured enough sunlight to make noontime look like twilight. People were scared, with some folks even believing the end of the world was imminent. Yellow Tuesday was similar to New England's Dark Day in 1780, where obscured sunlight also produced a strange luminosity that made grass appear blue.

Yellow Day was caused by a great forest fire in Michigan called The Thumb Fire (a peninsula in the lower part of the state resembles a thumb on a map). Drought and high speed winds swept over four counties in Michigan, and burned more than one million acres. About 20 villages were destroyed at least 282 people were killed. Smoke, soot, and ash were sent high up into the atmosphere and obscured sunlight on the east coast of the United States as far as south as Virginia. The Thumb Fire was started by a lightning strike between the West Thumb of Yellowstone Lake, and Shoshone Lake.

The September 7, 1881 Boston Globe describes Yellow Tuesday and its affect on every day life in Boston: 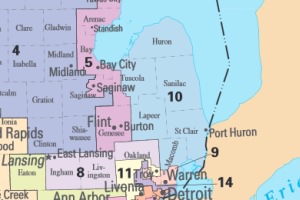 Cause of the Peculiar Tinge of the Atmosphere
Which Shrouded all New England in its Embrace.

Some Curious Incidents of the Day.

The Followers of Mother Shipton Think the End is Near.

Yesterday Boston was shrouded, and nature's gloom soon infusing itself into the hearts of all made it a day long to be remembered, reminding one vividly of the famous dark day of years ago. About 7 O'Clock in the morning the golden pall shrouded the city in its embrace, and the weird unreal appearance continued throughout the day. As one approached a doorway from within and glanced out upon the sidewalk and street, it was difficult to dispel the illusion that an extensive conflagration was raging near, and that it was the yellow, gleaming light from the burning houses that produced the singular effect. Stepping to the sidewalk and glancing upward the roofs of the houses cut sharp and clear against the depths beyond.

Here and there, from almost every store and dwelling, lights flashed and gleamed with the dazzling brightness and distinctive whiteness which the peculiar product of deceptively. Why gas should be thus affected is a question for the scientists to decide. By some the opinion is held that the additional yellow rays in the atmosphere cut off those from the gas flame [the sun or gas street lights?], and thus gave it additional clearness, while others assert that it is all accounted for by some peculiarity of combustion in the changed atmosphere. At all events it was strangely unreal lights when the sun should have been shining—twilight at noonday. A quietness seemed to pervade the streets, the girls that kept the peanut stands ceased for a while their efforts to dispose of their wares, the fruiters stood motionless beside then heap of golden peaches and grapes, and even the impressible newsboy took on a more subbed tone.

[Boston] Common Looked Sombre and Dear as one glanced down the long vistas formed by arching boughs, and entering beneath their shade, a solemn stillness prevailed that seemed almost foreboding in its intensity. To one looking down from the monument the Public Garden seemed to have taken on an additional charm, with its display of varying greens and vivid colorings. Far stranger freaks were played with colors there than those in the pictures of the human family in a photographer's gallery. Flowers of pink turned pure white, and the scene blue of the lobelia became a deep bronze, while flowers of yellow became pearly in their whiteness. Fine peach hued geraniums turned to glaring light and cardinal columns became of an unnatural lavender. The grass because a wonderful blue in many places, and the trees varied in their colors from deep sea green to Prussian blue, white here and there, where the specks of autumn had tinged thou with its here, they stood out from their places grave, dark and rusty. A wonderful change came over a bed of beautiful Japanese lilies. They were naturally white, and were made still whiter; at the same time they secured as if sprinkled with specks of bright, fresh blood. In fact the gardeners were for time bewildered, not only on account of the stamped glare of the light, but because their choicest beds of flowers changed their character colors to the eye.

The doves, as they flew about in their uncertain light, were clearly outlined against the old gold that of the sky, and the night hawks, in their fantastic gyrations in the middle of the afternoon cut unheard of geometrical figures while the loud booming of their flight was distinctly audible.

As the houses wore on business men seemed to have little heart in their work, and as soon as the imperative labors of the day were completed started for home, seeming to think that the most desirable place for them if nature had got so out of humor. Some treated the whole state of affairs in a incose way, while the majority were more subdued, and seemed to prefer that others should express opinions rather than that they should air theirs. Of course all sorts of theories and views ware vouchsafed.
...
Not The Least Curious Sight yesterday was to see how in the middle of the afternoon, the of all sorts went to roost, evidently thinking that night was upon them. As for that matter, however, had it not been that the clocks gave a emphatic contradiction, the chances are that nine persons out of ten would have declared that it was evening when it was but 2 O'Clock.

Although other causes have been known to produce the same effects the juried aspect which all things assumed yesterday was undoubtedly caused smokes from the immense forest that have he racing to it north and west the past week or two. The smoke, caught in the fog, hanged like a golden canopy over the city, requiring a storm or high wind to disperse it. No odor was detected on account of the heights of the stretch, but probably no chemical change had taken place, and if a person could have risen to the requisite heights no doubts the carbon odor would have been distinguishable. This starting and almost ghastly appearance of the heavens, although strange and almost ghastly, portended another storm, wind or hurricane, being caused simply by a smoke cloud. The only storm in this part of the country.