In December, 1917, in Halifax, Nova Scotia, SS Mont-Blanc, a French cargo ship loaded with wartime munitions, and SS Imo, a Belgian relief ship, accidentally collided in a section of Halifax Harbor aptly named The Narrows. The result was the biggest accidental explosion in world history. Upon hearing of the news, Boston immediately sent a relief train with doctors, nurses, and supplies to aid the devastated city.

In 1919, Halifax sent Boston a Christmas Tree in gratitude for the assistance, and the Nova Scotia Christmas Tree tradition was borne. Each year a tree-lighting ceremony takes place on Boston Common in memory of the tragedy, and in celebration of Christmas and human fraternité.

This year, the Nova Scotia Christmas Tree Lighting Ceremony will take place on Thursday November 29, 2018, from 6:00 pm to 8:00 pm. The tree will be lit up at 8:00 pm by Mayor Walsh, who will be joined onstage by Minister Andrew Younger of Canada, members of the Royal Canadian Mounted Police, and Santa Claus. The show will close with a pyrotechnic display by MagicFire, Inc.

This year's performers include TBA. In previous years, artists such as comedian Jimmy Tingle, cast members from Motown The Musical, The Voice contestant Brittany Butler, the New England Patriots Cheerleaders, Nova Scotia band The Stanfields, the Floorlords dance troupe, and the Holy Tabernacle Church Christmas Cantata Choir, have performed at the ceremony. The event has grown in popularity, with kids and adults alike enjoying this traditional opening of the Christmas Season in Boston. 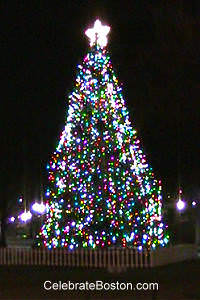 The Halifax Explosion should always be remembered. Here's the story of the tragedy that unfolded on December 6, 1917:

The collision of the two ships originated when the outgoing Imo was passing through The Narrows on the wrong (east) side of the harbor. An incoming American ship, that was planning to dock on the east side of the harbor, communicated with Imo, and they both agreed to pass each other on the wrong sides of the channel. Another ship, a tugboat called Stella Maris, was passing Imo at the same time. Imagine two cars both traveling on the wrong sides of the road, with another vehicle attempting to drive down the center in between them.

The Mont-Blanc was also coming into the harbor on the correct (east) side and heading directly toward Imo. Imo and Mont-Blanc exchanged signals, but neither ship changed course. Eventually, at the last moment, the captain of the Mont-Blanc decided to turn the ship to the left and try to avoid the oncoming Imo. Upon seeing this, the captain of the Imo ordered full reverse of the engines in an attempt to stop and give Mont-Blanc more room to turn. However, the backward action of the propellers slightly altered the course of Imo, bringing both ships into a collision course.

The damage to either ship was not severe, but Imo's bow got lodged into Mont-Blanc and the impact toppled several barrels of benzol aboard the Mont-Blanc. Sparks flying from the metal points of impact ignited the benzol, and soon a huge fire was roaring on one side of the Mont-Blanc. The captain ordered his men to abandon ship. The flaming ship drifted slowly towards the shore, with no one knowing about its cargo except for the fleeing crew, who shouted warnings in French to mostly English-speaking onlookers. As firefighters and nearby boats came in to extinguish the blaze, the inevitable happened—the Mont-Blanc exploded.

In a fraction of a second, the explosion released a shockwave equivalent to that of almost 3,000 tons of TNT, roughly a fifth of the force of an atomic bomb. The explosion also triggered a 59-foot tall tsunami which devastated waterfront areas. Even worse, the explosion occurred in winter, and the shockwave caused oil lamps and furnaces to tip or spill, starting fires that raged in entire blocks of the city. The explosion was felt and heard as far away as 130 miles. An estimate of around 2,000 people died in the incident, 1,600 of them dying immediately as a result of the blast, tsunami, and collapse of buildings. 9,000 people were injured, of which 6,000 were severe. 1,630 homes were destroyed and around 12,000 more suffered damage. Mi'kmaq settlement, a community of around 20 families, was completely obliterated. About 100 children died while walking to one school located in the Richmond District. Shells and projectiles rained down upon Halifax as munitions exploded on the Mont-Blanc, with many people initially believing that the city was being bombarded by the Germans.

This tragedy did not happen without acts of bravery and selflessness by local residents. In particular, a railway dispatcher named Vincent Coleman was a true hero. Upon hearing the news of the danger from the burning Mont-Blanc, Vincent intended to flee. However, upon remembering that a passenger train from New Brunswick was due to arrive within minutes, he returned to his post and sent out the following urgent telegraph message to stop the train: "A munitions ship on fire and is making for Pier 8. Goodbye." Coleman's message was heard by incoming trains, and the New Brunswick train was able to stop a safe distance from the blast radius, saving about 300 lives. The crew of the Tug Boat Stella Maris had attempted to douse the flames on the Mont-Blanc with its fire hose just before the explosion, and 19 (of 24) men were killed. Also, nine members of the Halifax Fire Department died while performing their duties during the tragedy.

Upon hearing of the news, Boston immediately launched a relief train with doctors, nurses, food, water, and supplies towards Halifax. Despite the heavy snowfall which slowed the train, it reached its destination 700 miles away a day and a half after the explosion. The volunteers from Boston stayed there for weeks, and also helped with the rebuilding effort. Aside from the initial relief train, Boston also contributed an entire warehouse full of household goods to support the rehabilitation effort.

As to the cause of the disaster, three people were initially deemed responsible: Aimé Le Medec, Mont-Blanc's captain, Francis Mackey, Mont-Blanc's pilot, and Frederick Wyatt, the Royal Canadian Officer in charge of harbor movements. The first two were charged with manslaughter, but were eventually acquitted. Wyatt was censured for not acquainting himself enough with harbor ship movements on that ill-fated morning. Two years later in May, 1919, the Supreme Court of Canada ruled that both ships in the collision shared equal blame for the incident.

The following year, Halifax shipped a Christmas tree to the city of Boston as a token of gratitude and remembrance for the latter's invaluable aid in the relief effort. In 1971, a Christmas tree producer's association began an annual donation to Boston to revive this Thanksgiving tradition, and was later taken over by the Nova Scotia Government. This gift is Boston's official Christmas tree, with the Mayor hosting a tree-lighting ceremony each year. Guests from Nova Scotia attend the event, with adults and children from both countries mingling to celebrate Christmas and to remember those who lost their lives in 1917. 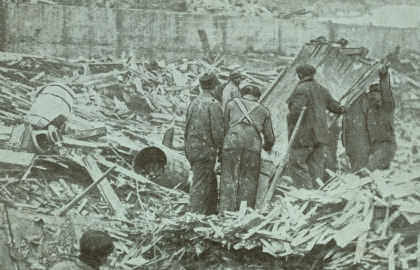