This annual culinary event is officially known as the Boston Harborfest ChowderFest, but is locally referred to as just the Chowdahfest. It's a competition between restaurants in the greater Boston area for the best New England style clam chowder. The Harborfest is a week-long celebration of Boston's maritime and colonial history, which culminates with fireworks on July 4th at the Charles River Esplanade. 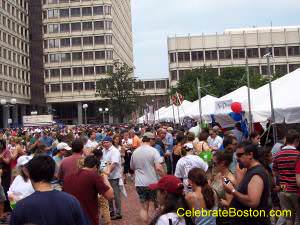 Visitors walk up to the canopy of each of the participating restaurants and are given a sample of clam chowder. You can sample as much chowder as you like, and can re-try your favorite chowder. When you have had your fill, you can vote for what you considered to be the best chowder. At the close of the event, the votes are tallied and a winner is announced. An area of tables is set up if you'd like to sit down, with an adjacent beverage tent.

The style of chowder can vary from thin and soupy with minced clams, to extremely thick and creamy with potatoes. If you are a big fan of clam chowder, this competition is a must-attend event. If you are a tourist, it's a great way to sample varying kinds of a local food.

2014 would have marked the 32nd anniversary of the Boston ChowderFest, and the event has become a local July 4th celebration tradition.