"The National Peace Jubilee was a great music festival held in Boston that commemorated the end of the Civil War. This event was organized by Pat Gilmore, a famous band leader of that day. Gilmore was born in Ireland, and had emigrated to Boston in 1848. The Jubilee still stands as one of the greatest public events that has ever occurred in Boston history.

Application was made for the use of the Boston Common on which to erect a temporary Peace Jubilee Building, or Coliseum, but strong opposition was made to it, and it was decided to build it in the Back Bay. The Coliseum occupied part of the site where Trinity Church now stands in Copley Square, and extended to the lot of the current Copley Plaza Hotel. The official name of the Coliseum was the Temple Of Peace.

The Coliseum was a stupendous enterprise for a city the size of Boston in 1869, a city still suffering from the incalculable losses of the Civil War. When filled, the great wooden building held 50,000 people, and was the largest structure in the country. But the mere size is not so astounding as the fact that the building was constructed, solely, for a musical festival to last but five days. Yet so musically mad were the public, that the receipts for the five days, not only paid the expenses, which amounted to over a quarter of a million dollars, but yielded a profit of $10,000. 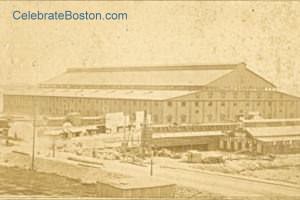 The Peace Jubilee was carried to a successful conclusion by the enthusiastic determination of Patrick S. Gilmore, a popular bandmaster, who refused to be defeated by rebuffs or scoffing. He was fortunate in securing the alliance of many public spirited business men, who continued to pour money into the treasury, when it seemed as though the gigantic enterprise was doomed to absolute failure.

The festival was held June 1-19, 1869. We know of no excitement for any other event that can begin to compare with that which raged in and about the Coliseum during those five days [the July 4, 1976 Bicentennial Celebration would be a good comparison]. In the audience were people from every State in the Union, and there was the wildest applause and enthusiasm after every selection.

Many Bostonians were in that audience day after day as members of that chorus of 10,000 voices, and to their dying day did not forget the wonderful scenes which they witnessed there. The great musical artists, Ole Bull and Carl Rosa, were first violinists to the orchestra of 1000 pieces, and the two greatest singers of the day, Parepa-Rosa and Adelaide Phillips, leaders of the great chorus.

When the closing strains of "The Star Spangled Banner" and "America" were sung, bells all over the city were rung, and the guns of a battery near the Coliseum were booming. When the "Anvil Chorus" (Verdi's Il Trovatore) was given, 1000 red-coated firemen gave the resounding clang on as many anvils.

Nearly every seat was occupied at every performance. Many distinguished guests were present, among them President Grant and Admiral Farragut. It was thought by many that such a volume of sound would be deafening, but but such was not the fact, the great orchestra and the tremendous chorus kept excellent time, and the whole effect was most pleasing.

The whole undertaking was a remarkable success, and as we have already said, excited the most unrestrained enthusiasm both on account of its musical features and its patriotic tendency.

The following is a description of the gigantic Coliseum Building