Each year, people strip down into tiny bathing suits in near freezing weather and run around the Back Bay to raise money for a local charity. The run is limited to the first 700 registrants, age 21 or older.

Registration begins at the Lir Tavern (903 Boylston Street) at 10:00 am, with the run taking place at 1:00 pm. The fee is $30, with a commitment to raise at least $400 in donations per registrant. This popular annual event was formerly known as the Santa Speedo Run Boston.

Libations start immediately after registration, with participants toasty warm before heading outdoors. It's usually a balmy 30 degrees outside as participants of the SS Run gather at the Lir to celebrate and fill their bellies with enough alcohol to warm their bodies in preparation for the one mile jaunt in freezing temperatures down Boylston Street and back up Newbury Street. And then the clothes come off just before the walk to the starting line! 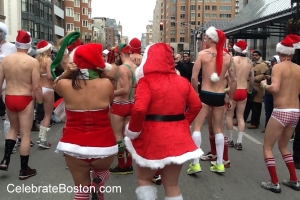 Each participant adorns nothing but a a skimpy bathing suit and a festive Santa hat. As the runners gather at the starting line near the top of Boylston street, crowds gather, photographers flash, and the first snowflake of the year seems to appear. The energetic runners let out a roar as the run begins. Crowds cheer, some stare, as the participants round Berkeley Street and then back up Newbury to Gloucester Street. The pace speeds up in the home stretch as a festive post-run party for the runners starts soon after the race in the Lir Tavern.

For the past 19 years, the SSRun has raised nearly $2 million for various local children's charities. Since 2012, the SSRun became aligned to the individual cause of raising money for Play Ball Foundation, which provides local middle school students a chance to participate in sports, and build character and friendships through teamwork, communication, and discipline.

Enthusiasm and spirits run high at the annual SS Run for charity. Participants range from young to old, male and female, fit and flabby, timid to cool (in more ways than one), so anyone is welcome. Consider participating or sponsoring a runner in the SS Run if you are able to, as it raises money for charity and has the atmosphere of a Christmas party. It's become a local holiday tradition in Boston, albeit one of the more eccentric events.