The hot air balloon was invented in France in 1783. The first American flight, tethered, occurred in Baltimore in 1784. By the late 1800s, balloons were used for geographic surveying, and for military applications such as aerial observation and evacuation of troops. In the 1900s, balloons were used for barraging (entangling aircraft), weather observation, and atmospheric research.

Boston is a center of invention and innovation. The photograph below was taken in 1860 by James W. Black from the balloon, Queen of the Air, owned by Samuel Archer King. This image is the first successful aerial photograph taken from a balloon in the United States (Black had attempted to photograph Providence Rhode Island from the air before this). The original photo is part of the Boston Public Library collection. 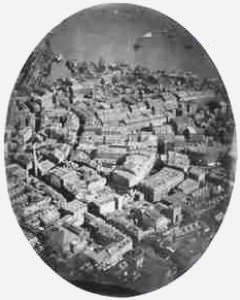 This 1860 view is looking east from a tethered balloon on Boston Common. Washington Street is in the foreground, with the Old South Meeting House on the left. Please note that most of the buildings in the center were destroyed by the Great Boston Fire of 1872.

On July 4, 1861, Queen of the Air later crashed into the sea off Nahant after being swept away from downtown Boston by high winds.

Of historical interest are early references of balloon aviation in Boston. The following is quoted from the 1838 Boston Almanac about events the previous year:

On July 4th 1837, everything went off well, the wind was northwest, and the day was one of the finest of the season. Every one seemed to participate in the festivities of the occasion. In the afternoon [Louis] Lauriat ascended from East Boston in his balloon. He passed over Duxbury, and landed safely on the flats beyond that town, in about an hour after he left the amphitheater. His greatest height was 17,000 feet. The evening was mild, with scarcely a cloud above the horizon. Crowds of people soon filled the Common, where they witnessed fireworks that surpassed any thing of the kind ever seen in Boston.

On July 26th 1837, Lauriat made another ascension from East Boston. He descended on Point Shirley [at Winthrop, MA, heading out to sea]. He did not reach a very great height."