"The earliest newspapers of the New World were published in Boston. The very first venture was attempted in 1690, with the publication of "Publick Occurrences. Both Forreign and Domestick," printed by Richard Pierce for Benjamin Harris at the London Coffee House. It came to a sudden end after a single issue. The General Court denounced it as containing "reflections of a very high nature," and promptly suppressed it; at the same time forbidding "anything in print without license first obtained from those appointed by the government to grant the same."

Fourteen years later in 1704, the Boston News-Letter made its debut, "Printed by Authority," and publication continued for 72 more years. It was the first true newspaper published in Boston, and in the colonies. The initial issue bore the date of April 24, 1704. Its appearance was an event in Boston. An early historian wrote, "There was a visible sensation. The first sheet of the first number was taken damp to Chief Justice Sewall to show President Willard of Harvard University what a wonderful curiosity it was." It was published by John Campbel, postmaster of Boston, and son of Duncan Campbel, the organizer of the Postal System in America. 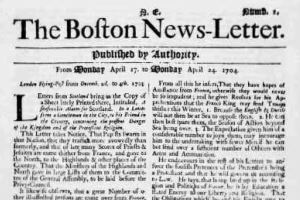 The newspaper was printed by Bartholomew Green, a famous printer in his day, who had an office on Newbury Street [now Washington Street] near the Old South Meeting House. The paper was sold at the nearby shop of Nicholas Boone.

The first edition was half-sheet, and only two pages. It contained news taken from the London papers, and a small amount of domestic news. In 1721, Campbel took upon the idea and printed some copies of his News-Letter on a sheet of writing paper, leaving one page blank, so that subscribers could write their letters on this page and then send the paper abroad without any extra postage.

The second edition of the paper declares its advertising policy: "This News-Letter is to be continued weekly; & all persons who have any houses, lands, tenements, farms, shops, vessels, goods, wares or merchandizes, &tc to be sold or let; or servants run-away; or goods stole or lost; may have the same inserted at reasonable rate, from twelve pence to five shillings, & not to exceed: Who may agree with John Campbel Post-master of Boston for the same: And if in the country, with the post-master of the respective towns, to be transmitted to the post-master of Boston: & all such advertisements are to be brought in writing to said post-masters."

The paper later changed its name several times. The last owners, Margaret Draper and John Howe, were fierce Tories, and the paper was discontinued when the British evacuated Boston in 1776.