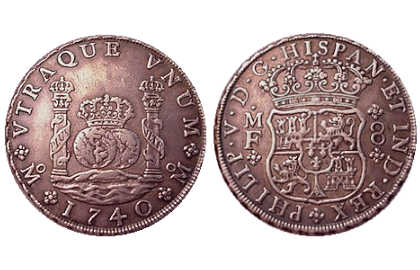 The Spanish Milled Dollar was the most common coin that circulated in the American Colonies, and was used in the United States well into the 1800's. The coin was also known as the "pillar dollar" or "piece of eight". Occasionally, due to its intrinsic weight in silver, the coin was cut into 8 pieces. "Two Bits" of an 8 Reale coin, is how the U.S. quarter dollar got its nickname for many years.

In 1652, the first mint in English America was established at Boston. The original coins were simple, and had "NE" stamped on them for the New England Colony. Oak, Willow, and Pine Tree Shillings, with a more complex design, were soon minted to reduce counterfeiting. The "international currency" at that time was the Spanish Milled Dollar, and interest in creating more coins in Massachusetts waned until 1787. The first mint in the New World was established in Mexico City in 1535, at the home of Hernando Cortez. 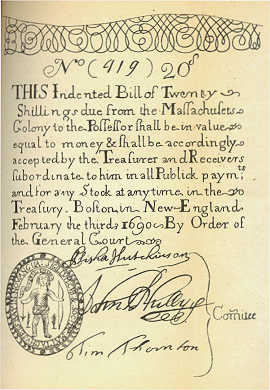 The Colony of New England had sent a military expedition to French Canada in 1690. The cost of the campaign was approximately 50,000 English Pounds. Elisha Hutchinson, of the Committee of Finance, explained in a public speech, that the expedition "hath run us into debt." Due to "difficulties and necessities", the colony had to pay its debts by issuing bills of credit or paper money. Silver was scarce and after paper money was issued, I'm sure it was even scarcer. The New England Colony was a net exporter of silver, as goods had to be purchased from other colonies and countries using "hard" currency or silver/gold coins. This is the first instance in U.S. history where paper circulated as a medium of exchange. The above image is reproduced from an 1848 guide book, and is an example of the 20 Shilling denomination. 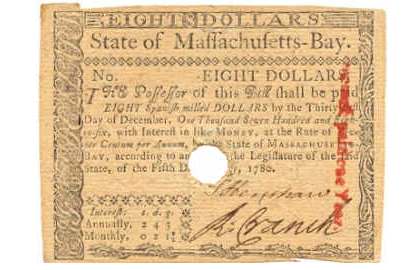 This note is very similar to 1690 bill of credit. An interest rate is published on the lower left, making this essentially a bond or promissory note. Please observe that the bill explicitly states it will be paid in Spanish Milled Dollars. These notes did circulate, as the Revolution was still in progress and everything was at stake. The citizens had to make due during the struggle.