Central Burying Ground is located within the southern portion of Boston Common. This cemetery is a key place to look for ghosts or spirits if one believes in such things.

In 1722, only one building stood on the land that eventually became Central Burying Ground. The town purchased the parcel in 1756 for use as a cemetery. From 1722 to 1780, it is likely that many people were buried here in unmarked graves. It is also likely that parts of what are now Boylston and Charles Streets were used as burial places, and it is believed that British soldiers were buried here after the Battle of Bunker Hill. Visitors, foreigners, and desperately poor citizens were buried at Central. The cemetery was last used by Boston's early Roman Catholics, being mostly of French descent and some Irish, from about 1800 to 1820. 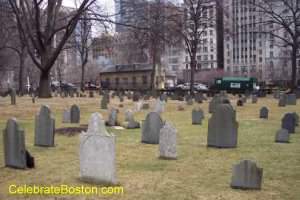 By 1814, Boylston Street was laid out, which marked the southern boundary of Boston Common. In the 1830s, Boylston Street Pedestrian Mall was constructed, which eliminated about 15 feet of the southern part of the burying ground. A row of brick tombs was opened up during construction, and the mixed remains of those unclaimed by descendents were placed inside these open tombs. The tombs were then just covered over, with Boylston Mall paved on top.

About the same time, a new row of tombs was built on the north side of the cemetery, replacing the displaced row. During excavation, bones were uncovered that were probably the earlier remains of British soldiers. Using conjecture, the bones may have then been buried in an unmarked grave under the new tombs.

During subway construction in 1895, the human remains under Boylston Mall were re-discovered, and through careful examination it was determined that about 900 bodies were there. A mass grave was placed in the cemetery at that time, which is delimited by three small cornerstones and a large marker in the northeast corner of the grounds.

The poorest of Boston's citizens were buried at Central Burying Ground. They died from terrible diseases, under miserable conditions. Many children are buried here. The cemetery is a somber place, and should be visited with great respect.

This author will now describe some personal experiences at Central Burying Ground. In the early 1970s, the gate of the cemetery was chained up, with the parcel somewhat overgrown with vegetation. At dusk, from the Boston Common side, the cemetery looked like Potter's Field in It's A Wonderful Life. Thankfully, the burying ground was subsequently cleaned up.

In the early 2000s, this editor visited Central Burying Ground for the first time in many years. On entering the gate, I felt a profound sense of sorrow. It felt like being in a crowded place, with many people expressing a will to leave, but not being able to do so for some reason (like being delayed in a subway train during rush hour). I was searching for a specific marker, and came across the stone of three small children from the same family. I felt deep sorrow. I touched the marker for a moment, and said a few solemn words. I viewed more areas, but before departing I returned to this children's marker in respect.

This editor does not believe in spirits, but can be superstitious. Each time I returned to Central, I approached the children's marker on my arrival and then departure. After several visits, the sensation of entering the cemetery became almost that of gladness; like seeing a lost friend after many years.

In late March 2006, I visited Central Burying Ground and experienced a sense of sorrow again. There were patches of snow that day, and a dark overcast sky. I took a few pictures, and left after paying my respects. Across Boylston Street, a new building was under construction. It was a 14-story dormitory building for Emerson College, and was the first building constructed opposite the cemetery in about 80 years. On April 4, 2006, a terrible accident occurred at the site when a large scaffold collapsed, and three people tragically lost their lives. I found it strange that I had a sense of sorrow not long before this accident. The cemetery of course had nothing to do with the accident.

In recent years, the story of a young Girl Without A Face ghost at Central Burying Ground has surfaced, but this author cannot collaborate it with any older sources. A 19th century reference talks about a spooky path in the cemetery near the Sprague Monument (apparently moved, as the marker is now on top of the row of tombs). In any case, if spirits do exist, Central Burying Ground, many times desecrated, could be a place where lost souls remain. This author also notes that photographs at Central never seem to come out right, and are either too dark or overexposed, mostly due to the shadows of trees or from nearby tall buildings of course.