The former Charlesgate Hotel is located at Beacon Street and Charlesgate East in the Back Bay. The hotel was constructed in 1901, and was designed by J. Pickering Putnam. The building is of Romanesque Revival style, with a conical tower on the northwest corner, and beautiful sculpted copper cladding at the bottom of projecting bay window sections (oriels). The hotel may have been known as the Canterbury for a short time, and was still a fashionable address in the 1920s. 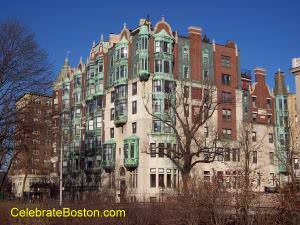 Before writing about alleged haunted happenings at the old Charlesgate, one has to consider the source of many of the stories. At age 21, I remember telling ghost stories myself, mostly at parties or while camping, and often my youthful intent was to gain the attention of a co-ed. One has to take this into consideration before believing any ghost stories. Paranormal activists would likely counter that young people seem to attract spirits, and it is not just their imaginations gone wild.

In the 1990s, several Emerson students had reported communicating with spirits, mostly while using a ouija board. Supposedly in one dorm there was a large closet that emitted "bad vibes," that was eventually attributed to a suicide there at one time. The suicide story may be loosely based on an actual incident, as described in the March 15, 1908 Boston Globe:

"Despondent and worn out by insomnia, and apparently for no other reason than melancholy [depression] induced by his nervous trouble, Westood T—, junior partner of '—' &  Son, manufacturers of shoe bindings at 40 Oliver St, shot himself in his apartment in the Charlesgate hotel early yesterday morning. He used a revolver and stood before a mirror, and placed a bullet accurately in his right temple.

Mrs— slept in the next room, and woke about 7, discovering that her husband was not in his place by her side. She called to him, but received no reply, and went into the next room, a bedroom which Mr— had sometimes used. There she found his body face downward on the floor; in his right hand was still the valuable revolver which he had used. Medical Examiner Mcgrath declared the case to be one of suicide."

The architect of the Charlesgate Hotel, J. Pickering Putnam, had actually died in the building several years later. The February 24, 1917 Boston Globe announced his passing:

"John Pickering Putnam, one of Boston's leading architects and author of many treatises on architectural and sociological subjects, died last night at the Charlesgate Hotel, aged 60 years.
...
Mr Putnam began the practice of his profession in this city in 1871. He was the inventor of improved styles of plumbing, steam heating, and water purification appliances...."

The most sensational story about the Charlesgate being haunted was by a student that claimed he was entrapped by a spirit. He was in the shower, and due to a light flickering in the bathroom, had attempted to tighten the bulb. A puddle of water had pooled on the floor, which quickly put him at risk of electrocution. His buddies were casually using a ouija board in the next room, and it supposedly spelled out "ha-ha-ha-ha-ha." And when asked why, it replied "ac-dc-ac-dc-ac-dc."

When I viewed the building personally, I did not experience anything paranormal in any way. For one brief moment I felt like someone was watching me, but I often get a similar sensation when my parking meter time is running out anywhere in the Back Bay, and the enforcement officers are [near invisibly] scurrying about the neighborhood.