On February 27, 1879, the mutilated body of a young woman was found in a trunk floating in the Saugus River near Fox Hill Bridge (today’s Route 107 Bridge between Lynn and Saugus). The body was later ascertained to be that of Jennie P. Clark, who died as the result of an abortion (then illegal in Massachusetts). The case made national headlines due to the gruesome nature of the crime. It took weeks to identify the body, and months to arrest the perpetrators. Two doctors were eventually convicted for the crime later that year, with one doctor sentenced to ten years in prison, and the other six years.

The incident was referred to in the national press as the Lynn Mystery Trunk and also the Mysterious Trunk case. The July 20, 1879 edition of The Daily Picayune (New Orleans) reported that her apparition had appeared near Fox Hill Bridge: 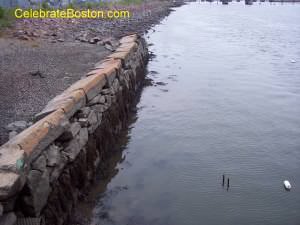 "There is considerable excitement in Lynn and vicinity over the reported appearance of a ghostly figure which for several nights past has terrified residents and passers-by in the vicinity of the spot where the trunk, containing the remains of Jennie Clark, was found.

Several persons of good reputation have taken oath that at different times they have seen the figure, which was that of a woman of small stature, arise as from the bridge, near that point, and walk swiftly away, passing almost within reach, and seen disappearing altogether.

One eyewitness describes the apparition as clothed only in a white chemise, and walking in bare feet. In her left hand was a dark object resembling a piece of cloth, the end of which was thrown over the right shoulder. Persons who have heard the story report that they, too, while doubting the truth of the affair, watched for its appearance, and were surprised and terror stricken at the apparition."