A Race With The Devil
Woburn, Massachusetts

The following story is from colonial times about a gambling man who was enticed by the Devil into a horse race. The man could win a black stallion if he beat the Devil in a race, but would presumably lose his soul if he lost. The tale dates from about 1775 to 1800.

The horses began the race like a wildfire, with the Devil's stallion nipping at the tail of the Woburn man's mare. At the last moment, the man realized he was in a race with the Devil and the stakes were higher than anticipated, and sprinted towards hallowed ground at the First Baptist Church near Woburn Common. The Devil did lose the race and his stallion, but the betting man may have lost his soul in the long run.

The following story, How The Black Horse Was Beaten, was published in American Myths & Legends by Charles Skinner, describes this legendary horse race. The story can be considered similar to Faust by Goethe of course, and possibly its original inspiration. 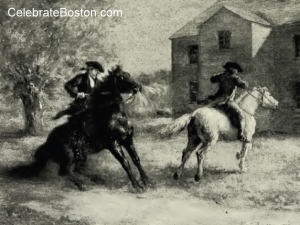 A Race With The Devil

SAM HART, of Woburn, was well known in the Bay State in the later years of the eighteenth century, for he was a lover of swift horses,
a fearless rider, a [maker] of shocking wagers, and a regular attendant at fairs, races, and other manner of doubtful enterprises. He had one mare that he offered to pit against any piece of horse-flesh in the country, and he bragged about her, in season and out, making of her his chief topic of conversation and prayers, after the manner of men who drive fast horses.

While taking the air on his doorstep on a summer evening he was visited by a bland and dignified stranger whose closely shaven jowls, sober coat, cocked hat, and white wig made him look like a parson, but whose glittering black eyes did not agree with his make-up.

This gentleman had called to brag about his black horse, that would beat anything on legs, as he wished to prove by racing him against Hart's mare. He offered odds of three to one, with his horse into the bargain, and he would give the mare ten rods start. The race was to begin at Central Square and the black horse must catch the mare by the tail with his teeth before Woburn Common was reached.

Sam accepted this challenge in an instant, and next morning the village emptied itself upon the street to see the fun. The word was given. There was a cry and a snap of the whip, and away went the coursers, tearing over the earth like a hurricane. The mare was supple, long-winded, and strong, yet the big black [horse] was surely gaining. His breath seemed actually to smoke, so hot was his pace. Sam began to suspect what sort of being this was behind him, and instead of ending the run in the way prescribed he made for the Baptist church. It was impossible to pull up sharply with such a headway, and the chase went three times around the building at a furious gallop before Sam could steer the mare close enough to the church door to be on holy ground. Fire sprang from the black horse's nostrils. It [brushed] the mare's tail and the horizontally streaming coat-tails of her rider. Then the black horse went down upon his haunches, and Sam, pulling up with difficulty, dismounted.

The Devil, who had been riding the black [horse], was out of his saddle first. Said he: "You have cheated one whose business is cheating, and I'm a decent enough fellow to own up when I'm beaten. Here's your money. Catch it, for you know I can't cross holy ground, you rascal; and here's my horse; he'll be tractable enough after I've gone home, and as safe as your mare. Good luck to you."

A whiff of sulphur smoke burst up from the road and made Sam wink and cough. When he could open his eyes again the Devil was gone. He put the black horse into his stable, and had him out at all the fairs and functions, winning every race he entered. Still, the neighbors doubted the blessing of the Devil, for they used to say that the black [horse] was still the Devil's horse, and that money, won by racing—especially when it was won on a sure thing—would weigh the soul of its owner down to the warm place when he died.