The following story is about Wabanowi, Sachem in what is now Woburn, Massachusetts. Fighting Bear was Sachem of the Narragansett Tribe of Rhode Island, and he fell in love with Wabanowi's daughter Nansema. Fighting Bear proposed marriage to Nansema, and gave a long speech to Wabanowi. He professed his love for Nansema, and noted that their two tribes would be united and stronger if their marriage was consummated.

Wabanowi was a proud man and was offended by Fighting Bear's speech. He rejected Fighting Bear's proposal and sent him back to Rhode Island. That evening, Wabanowi was visited by his Guardian Spirit, and she enticed him to visit a glistening cave on Mount Mianomo (Rag Rock). In this cave Wabanowi fell asleep for many years and disappeared from society, and his daughter Nansema married Fight Bear and moved to Rhode Island. 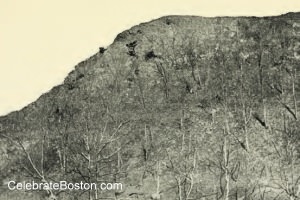 Wabanowi later awoke to discover that his tribe had disappeared, and he then moved to Rhode Island with his daughter and son-in-law. It is said that the spirit or ghost of Wabanowi visits Mount Mianomo each September during the full moon, and then gently canoes at Horn Pond near Rag Rock.

The following is a condensed version of the story that was published American Myths & Legends by Charles Skinner:

MOUNT MIANOMO, or Rag Rock, in [Woburn] Massachusetts, was one of the dead monsters that had crawled down from the north with ice and stones on its back to desolate the Sun God's land. All of these creatures were checked when they reached the hollows dug by the Sun God to stay their march—the hollows that have become the pretty New England lakes—and there the God pelted them to death with heated spears.

At the foot of this hill, [four] centuries ago, lived many of the Aberginian progenitors [Northern Tribes], it is said, of the Aber-Nits, that arose on the isle of Manhatta in after years. Their chief was one Wabanowi, who thought more of himself than all the rest of his people did, who never learned anything, never made a true prophecy, and passed into vulgar local history as Stick-in-the-Mud.

This chief had a daughter, Heart-Stealer, and he made it a duty to nag and to thwart her in every wish, as befitted the Indian parent of romance. Fighting Bear, chief of the Narragansetts, fell in love with the girl, and after a speech of three pages in which he likened himself to the sun, the storm, the ocean, to all the strong animals he could remember, and the girl to the deer—could it have
been a dear? —the singing bird, the zephyr, the waves, and the flowers, he descended to business and claimed her hand. Every Indian, he said, had heard the prophecy that a great race with sick faces, hair on its teeth, thickly clad in summer, and speaking in a harsh tongue, was coming to drive the red man from the land of his fathers. By this marriage the Aberginians and Narragansetts would be united, and two such families could destroy anybody or anything.

The professional pride of Stick-in-the-Mud was touched. He sprang to his feet and cried: "Who has foretold this? I didn't. There is only one prophet in this district, and that's me. It isn't for green youngsters, Narragansetts at that, to meddle with this second-sight business. Understand? Moreover, my arm is so strong it needs no help to exterminate an enemy. I can beat him with my left hand tied behind me. Had you merely asked for my daughter I would have given her up without a struggle. If somebody doesn't take her soon I shall lose my reason. But you have added insult to oratory, and if you don't go quick you'll never get there at all." Thus speaking, Stick-in-the-Mud once more wrapped his furs around him so that only his nose and his pipe were left outside, while Fighting Bear folded his arms, scowled, observed something to the effect that Ha, ha! a time would come, and strode into the forest.

One evening a smoke hung over Rag Rock and shadowy figures flitted through it. A vague fear possessed the public. Stick-in-the-Mud, waking from a mince-pie dream in the middle of the night, saw in his door, faint against the sky, the shape of a woman who beckoned, and, hoping to uncover some secret that would be more useful to him in his fortune-telling matches than his usual and lamentable guess-work, he arose and followed her. The spirit moved lightly, silently up Rag Rock and entered a cavern that the chief had never seen before—a cavern glowing with soft light and bedded with deep moss. He sank upon this cushioned floor, at a gesture from the spirit; then, with her arms waving above him, he fell into a sleep. Next day, and for several days, the citizens scoured the woods, the hills, and every other thing except themselves, in the search for Stick-in-the-Mud, but they did not find him. Another man, who had enjoyed singular misfortune in foretelling the weather, was promoted to be seer; then when the news reached Rhode Island—that was what it was going to be ere long—Fighting Bear hurried to the scene of his former interview and again claimed Heart-Stealer as his bride. Nobody said a word, so he took her to his home.

Now came the men of sick and hairy faces, white men, who wanted the earth and took it, making it no longer a pleasant place to live on. It was plain that they were the people whose coming had been foretold, and when King Philip waged a war against the English, Fighting Bear and a hundred of his friends joined in the riot. He was beaten soundly, and, being a man of sense, once was enough. He kept the peace after that.

When Stick-in-the-Mud awoke the cave was lighted again and the spirit that had led him there stood watching. As his eyes opened she spoke: "Wabanowi, I caused you to sleep that you might be spared the pain of seeing your people forsake their home for other lands. The men with pale faces and black hearts are here. Had you been with your people you would have stirred them to fight, and all would have been killed. As it is, they have not fought. I now set you free. Go into the Narragansett country and live with your daughter. You will find her married to Fighting Bear. Do not disturb their happiness. Come."

Then the rock opened and the chief tottered into the sunlight. He was full of rheumatism and fringed with moth-eaten whiskers that presently made the dogs bark. He needed new clothes. He needed a dinner. He needed a smoke. If he had known anything of fire-water he would have been sure that he needed a drink. He looked down at Lake Initou: not a canoe! On the site of his village: not a wigwam! The trees had been cut, log houses stood in the clearings, people with colorless faces were using strange implements in tilled fields. A cock crew. Stick-in-the-Mud started; it was a new sound to him. A horse laughed; he winced. A sheep bleated; he began to sweat. A cow lowed; he started for a tree. A jackass warbled; he looked around for the cave, but it had closed.

Descending, after he had gained confidence, he shaved himself with a quohog shell, found his wreck of a canoe, guided it for the last time across the lake, and landing at its southern end crushed it to pieces—not the pond, but the canoe. Then he went to Providence, where his daughter met him and presented a few of her children, who climbed over him, hung on to his hair, and otherwise made him feel at home. He saw that he had been outclassed as a prophet and that if he had taken the advice of his son-in-law he might have avoided being put to sleep in Rag Rock. Still, this Indian Rip Van Winkle had been refreshed by his slumbers, and he lived for a long time after, spending a part of every pleasant day in playing horse with the youngest of his grandchildren—for he had found that horses do not bite hard—and proudly watching the replacement of youngest No. 8 by youngest No. 9, then by No. 10, and so on to a matter of 18 or 20.

[Each] September, on the day nearest to full moon, he still goes back to Rag Rock and looks off at sunrise. You may see him then, or you may see him half an hour later skimming the surface of Horn Pond in his shadow canoe. Having thus revisited the scenes of his youth, he retires for another year.

The moral of the story is that Wabanowi should have listened to Fighting Bear and allowed him to marry Nansema. The Aber-Nit and Narragansett Tribes would have been united, and therefore better able to fight-off the English settlers. Wabanowi's Guardian Spirit had put him to sleep until his tribe was dispersed, sparing him the pain of observing his tribe being obliterated by the English settlers.