"When witchcraft is mentioned, [one] usually thinks of Salem. Yet the first person executed as a witch in New England went to [her] death on the gallows-tree in Boston. She was Margaret Jones, wife of Thomas Jones of Charlestown.

Witchcraft was recognized by the very early laws of Massachusetts. "If any man or woman be a witch (that is hath or consulteth with a familiar spirit) they shall be put to death." Such was the law and such was the teaching of the ministers of the Bay Colony.

Massachusetts, however, was not alone in holding to this delusion. Belief in witchcraft was general in Europe. And in the three years immediately preceding the persecution of Margaret Jones, scores of people had been convicted and put to death in England.

Stories of the grave state of affairs overseas led the people of Boston to fear for their own safety. "Perhaps there may be witches among us," they thought. Perhaps our very neighbors are possessed of evil spirits. And they began to look around them, to watch each move and to wonder at its significance, until in their own disordered minds—disordered by a wearing, humdrum existence in a world bounded physically by the horizon and mentally by an intemperate speculation upon the infinite and a crazy interest in the personal affairs of fellow men—in such minds was borne the bloody delusion of witchcraft. 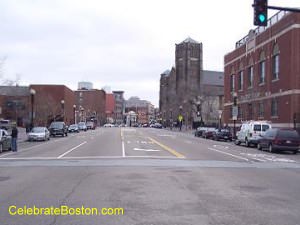 In the town of Charlestown a good woman gave her time and her skill to bring health and cheer into the homes of the sick. Like so many housewives of her day, Margaret Jones was skilled in making cooling drinks and soothing remedies from herbs and berries. And she visited her neighbors, prescribing for their ailments.

But soon there were whisperings. Whence came her skill? How could she brew these simple drinks, yet effect such wonderful cures? Something wrong! Something mysterious! Something that we must watch out for! The whisperings grew until they reached the ears of the magistrates. And early in the Spring of 1648 the good woman and her husband were arrested and thrown into the Boston Jail.

The jailors seize her, examine certain marks on her body, and insist that they are marks of a witch. And then, when the court comes in, we find the following order set down upon the books:

"This court beinge desireows that the same course which hath ben taken in England for the discovery of witches, by watchinge, may also be taken here with the witch now in question, & therefore doe order that a strict watch be set about her every night, & that her husband be confined in a private roome, & watched also."

Here is [the] evidence that the magistrates were guided by the bloody news coming in from the other side of the Atlantic, where Mathew Hopkins, witch-hunter, was sending dozens of innocent men and women to the gallows.

And so here in Boston a witch-watcher is appointed; and in the night of April 18 he begins his evil work.

What does he see? Enough, quite enough! He peers into the dirty room where Mrs. Jones is confined. Perhaps he was crazy, perhaps primed with too much of the beer from the brewery down back of the jail; perhaps he was just a plain liar. But he says he saw a child in Margaret Jones' arms; that when he started in, the child ran into another room, and then vanished into thin air.

There is other damming evidence. She "was found to have such a malignant touch" that many persons upon whom she laid her hands were "taken with deafness, or vomiting, or other violent pains or sickness." [And] then the "extraordinary violent effects" of her medicines were brought up against her. In vain, she protests that they were simple herb teas. She used anise seed in one of them. Anise seed! The magistrates, even the fairly sane-minded John Winthrop, seize upon it. It is anise seed—merely anise seed—how can she explain the marvelous potency of the brew? Has she not condemned herself?

Others come forward and assert she told those who did not take her medicines that they would never be healed. "And accordingly," writes down Winthrop in his journal, with all gravity, "and accordingly their diseases and hurts continued, with relapses against the ordinary course, and beyond the apprehension of all physicians and surgeons."

Frantically, desperately, the woman denies this. But there is no hope for her. Her very [disposition], and she sees herself being condemned, goes against her. "Her behavior at the trial was very intemperate, lying notoriously, and rallying upon the jury and witnesses, etc," says Winthrop.

And so she is found guilty, and sentenced, and led over to the hanging-place [June 25, 1648]. And when the terrible thing is ended, there comes the final evidence against her—evidence so overwhelming, so incontrovertible, that Winthrop sets it down in the record. "The same day and hour she is executed," he says, "there was a very great tempest at Connecticut, which blew down many trees, etc."

Meanwhile, her husband has been released. And now he begs the captain of the ship Welcome, at anchor off Charlestown, for passage to Barbados, so that he can get away from the hated place. But the captain refuses; and some hours later the vessel begins to roll strangely. There are 80 horses on board of her; and their constant shifting probably caused the ship to move. But to the captain and crew the trouble is due to witchcraft.

"Jones has bewitched the ship," they say. And so the unfortunate man is dragged forth and hurried into the prison again. The ship, says Winthrop, moved no more.