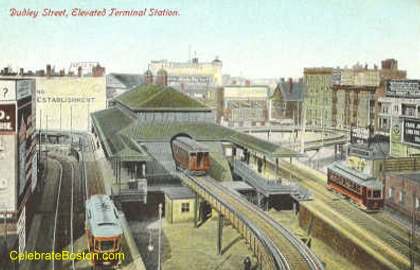 The Boston Elevated Railway opened the Main Line Elevated on June 10, 1901, the original Orange Line. The elevated division ran from Sullivan Square Charlestown in the north, entered and then exited the Tremont Street Subway (now the Green Line, as parts of it had four tracks), to Dudley Street, Roxbury in the south. The above view shows the two loops for the trolley lines at Dudley, which allowed reversing direction very quickly. The Washington Street Tunnel opened on November 30, 1908, ending the use of elevated cars in the Tremont Street Subway. The Main Lin was expanded from Dudley Street to Forest Hills in 1909, and from Sullivan Square to Everett in 1919. During the 1970s, the elevated north side section to Everett was torn down and replaced with a surface line over an old railroad right of way. In 1987, the elevated south side to Forest Hills was also torn down and replaced with a surface line. 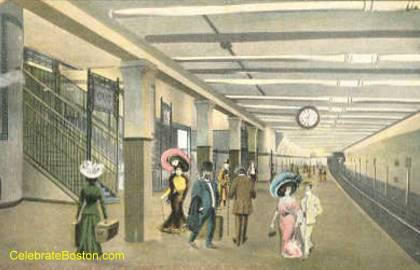 A view of Milk Street Station looking south. Opened in 1909, the Washington Street Tunnel allowed swift north/south transit through downtown Boston. The tunnel travels directly under Washington Street. An interesting fact is that Washington Street is relatively narrow, and to "cut and cover" a tunnel, the north and south "tubes" are at different offset levels (to avoid stacking them on top of each other). The stations have two separate parts, and originally each platform had its own name such as Milk/State (now State), and Union/Friend (now Haymarket). Casual dress is just 90 years away! 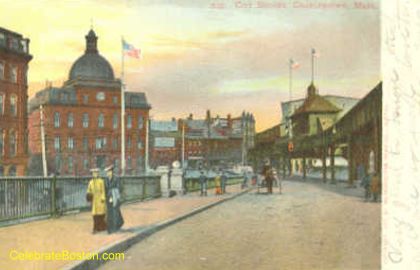 A view of City Square in Charlestown looking north from the Charlestown Bridge. The station is on the upper right with a southbound train stopped in the station. The steel Charlestown Bridge still stands at Causeway and North Washington Streets in Boston, near the TD Garden. It has two "extra" auto lanes in the center, where the "El" used to cross. It is safe to say that a lot of young children did not like riding the "El" over the bridge, as passengers could look down to the auto deck, and then even further to the river below through the grates. There was a sharp 90 degree turn (and a rail switching tower) on the Boston side, which caused great screeching of the cars at the bridge. Most of the old "El" stations were beautifully designed, clad with copper sheathing, of which City Square was a fine example.

A view of City Square Station looking north from the east side of the elevated structure. During the 1950s to the early 1990s, a massive green bridge for automobile traffic (U.S. Route 1) was located above the station. There are many photos of Orange Line trains traveling under the auto structure, when heading into the station. A connector tunnel eventually replaced the ugly green auto road during the 1990s (an early portion of the Boston Big Dig project).

A view of Sullivan Square Station in Charlestown. The building was a terminal for many northern surface trolley lines, and later bus lines. Sullivan Square was a bustling place, as passengers would depart the elevated cars, and then walk to one of many trolley berths. The building housed the offices of the Boston Elevated Railway for many years, builder of the Main Line. View elevated photos.