In 1859, eleven years before the incorporation of the museum, the Jarves Collection of Italian pictures had been offered as a nucleus for a public museum of art in Boston, but the project was abandoned. In 1869 several circumstances combined to reawaken interest in the scheme. The Boston Athenaeum had received a bequest of armor and the offer of funds for a room wherein to exhibit it. The Social Science Association had conceived the idea of a public collection of plaster reproductions of sculpture. Harvard College sought an opportunity to make its collection of engravings useful to the public. The Massachusetts Institute of Technology had no sufficient room for its collection of architectural casts.

In October 1869, representatives of these organizations united with other interested persons in appealing to the State Legislature, which early in the following year established a public Museum of Fine Arts in Boston by granting it a charter. No support from state or city was provided for, with the only gift to the museum from a public source being the plot of ground on Copley Square that was occupied by the original building.

Among the founders of the museum, Martin Brimmer, its President for twenty-five years until his death in 1895, and Charles C. Perkins, Honorary Director for sixteen years until his death in 1888, should be named first. The reports and published addresses of both testify to their high conception and clear grasp of the essential purposes of the museum. The first executive officer appointed was General Charles G. Loring, a veteran of the Civil War and both before and after a traveler in Egypt and student of Egyptology. General Loring remained in charge of the museum for twenty-six years as curator and afterward director, from its opening in 1876 until his resignation in 1902, and at his death a few months later as Director Emeritus.

At a meeting held on February 3, 1871, a committee was appointed to solicit donations for a museum building. The amount ultimately obtained was $261,000. From a number of competitive designs for a fireproof structure, the plans of Sturgis & Brigham, well-known architects of Boston, were selected. A wing of the building was dedicated on July 3, 1876, and on the next day was opened to the public, which was the centennial anniversary of the Declaration of Independence. The collections of the museum, both gifts and loans, which for four years had been exhibited in two rooms at the Athenaeum, were installed in the new structure.

In 1899, three circumstances led to the Trustees to consider seeking a new site for and erecting a new building: the inadequacy of the Copley Square property for future accommodations of the museum, the danger of fire from high neighboring structures, and the obstruction of light nearby. The grounds on which the present museum stands, covering twelve acres fronting Huntington Avenue and the Fenway, were purchased by a vote of the Board on December 5, 1899. On April 2, 1902, the sale of the Copley Square property was effected, and on May 27 a Building Committee was appointed to procure plans, specifications and estimates for constructing buildings on the Fenway property. Nearly five years of comprehensive planning was done before a new building was constructed, which included the erection of a temporary structure for testing purposes.

An image of the original MFA building is below. The Copley Plaza hotel now stands were the old museum building was located. 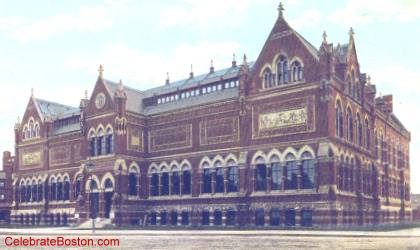