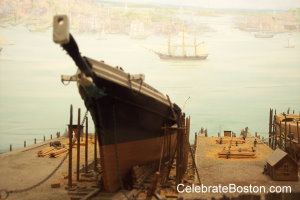 "The New Packet Ship Baltic, of New York. This is the last ship built [1856] by Mr. Donald McKay, the great naval architect. Since 1845, when he came to East Boston, he has built 108,000 tons of shipping, and disbursed nearly seven millions of dollars. He built the first three decked merchant ship in the United States, the New World, of 1500 tons, still a crack packet ship in Grinnell & Minturn’s line of Liverpool and New York packets; and we believe he was the first who constructed a merchant ship of over 2000 tons. His greatest achievement, the Great Republic, 4500 tons has just returned from a two years cruise in the Mediterranean, having been employed in the French transport service, and after an examination upon the dock, has been found as sound as ever.

We might fill a couple of columns describing the performance of his ships, but it is not necessary, for his same as a ship builder is known the world over. We cannot, however, but express our regret, that a man who has done so much to advance the science of naval architecture, should ignobly sink to his present position, the victim of a heartless conspiracy; but he has no one to blame but himself. He took a deceitful man to his bosom, knowing him to be such, and he had no right to expect that he would spare him, the moment he was in his power. He knew that he had outwitted all others who had befriended him, and ought to have been upon his guard. But live and learn is a good maxim—knowledge is better than money—while there is life there is hope; and we hope, notwithstanding the unmerited misfortunes which have befallen Mr. McKay, that he will yet live to profit by his experience.

The Baltic is a noble ship of 1372 tons register, designed to stow a large cargo, and to sail fast; and in point of beauty, either in model or workmanship, will compare favorably with any vessel he ever built. She has a bold and dashy bow, with slightly concave lines below, but convex above, and it is tastefully or lamented with a full female figure in vestments of white, fringed with gold. The stern is rounded and finely ornamented with gilded carved work, and viewed broadside on, she looks beautiful as a yacht.

She is 188 feet long on deck, has 39.5 feet breadth of beam, and 24.5 feet depth of hold, including 8 feet height of between decks. All her accommodations are on the upper deck. She has two fine cabins built into a half poop deck, which have been elegantly furnished by Messrs. Jas. H. Beal & Brother; a large house before the main hatchway, for the use of the crew, for the galleys and other purposes, and a full topgallant forecastle, which is fitted with berths on each side and amidships. She has movable houses over each of her hatchways; and the top of her cabin closes is surrounded by a rail upon mahogany turned stanchions, and the outline of her poop is also surrounded by a rail. She has splendid deck room for working ship, and looks as neatly as any vessel of her rise that we have seen.

Like all Mr. McKay’s ships, she is very strongly built. Her frame, all knees in the hold, and all the breast hooks and pointers, are of white Oak, her deck frames and scantling are of hard pine, and she is square fastened throughout. She has three depths of midship keelsons, also sister and bilge keelsons, and all her thick work is scarphed square fastened, and bolted edgeways. She has also 5 Wing stanchions the width of the beams, in the lower hold, clasped with iron above, and kneel to the bilge keelsons below, and the midship stanchions are also the width of the beams, and extended to both decks. In each end there are three hooks and pointers of Oak, which cross all the cants diagonally, and are bolted both ways. She has a lap strake or stringer under the ends of the hanging knees in the hold; double thick work over the waterways in the between decks, and a thick stake inside of them, the whole cross-bolted. Her between decks are lofty, well lighted and ventilated, and amiably adapted for the accommodation of passengers.

Her garboards are 8 inches thick, bottom plank 6, and wales 5.5 by 7, finished smooth as glass, and well fastened.

She has built lower masts and bowsprit, hard pine topmasts and jibbooms, and neatly and strongly rigged. Her mast-heads are crowned with gilded balls. She has nothing higher than royals, but looks as finely proportioned in her spares as a ship-of-war.

She is owned by Messrs. Zerega & Co, of New York and designed for their line of Liverpool and New York packets. Mr. McKay has heretofore built for the same firm the beautiful ships Arctic, Antarctic, A.Z. and L.Z., a good indication that his services have been appreciated. A man is known by his works.

In this connection it may not be amiss to review what Mr. McKay has done since he came to East Boston is 1845. Col. Train, his first and best friend, employed him to build the packet ship Joshua Bates, and perceiving that he was a man of more than ordinary ability, induced him to come to East Boston. Here he built for Col. Train the following ships:


We have given the tonnage of the above from memory, and therefore do not wish it to be considered official it is near enough in the gross to show how liberally Col. Train sustained Mr. McKay, when he was comparatively unknown. With the aid of the press, the performances of these fine vessels were continually kept before the public and the consequence was that in a few years, Mr. McKay, found himself famous, and had as much work as he pleased.

The California trade opened a new era in novel architecture and Mr. McKay bore away the first prize almost at a bound. The Flying Cloud made the passage from New York to San Francisco in 89.5 days, a passage which remains unequalled. His American clippers were as follows, exclusive of the Flying Cloud and Staffordshire, already mentioned:


The wonderful performances of Mr. McKay Clippers induced Messrs, James Baines & Co., of Liverpool to obtain his services to build for their line of Liverpool and Australian packets a class of ships that would take the lead; and be did so to their entire satisfaction. The first clipper, the Lighting, made the passage from Melbourne to Liverpool in 63 days a passage which has not yet been equaled by either steamer of clipper. The steamer Royal charter, buits of from, and of a clipper model, was 75 days in making the passage. The James Baines made the passage to Melbourne in 63 days and the passage back to Liverpool in 65 the shortest voyage on record. Her first passage from Boston to Liverpool was made in 12 days and 8 hours which has not yet been equaled by any sailing vessel. The following are the vessels he built for Messrs, Baines & Co.:


He also built, on English account, the ship Blanche Moore, of 1700 tons, and the barque Benin, of 692 one for the East Indian and the other for the Africa trade.

The following packets and freighting ships are well known, as strong the finest afloat:


Besides these, he has built two schooners at East Boston, the names of which we do not remember; but the aggregate amounts at a rough guess, to over 100,000 tons, and the money disbursed to nearly seven millions of dollars. Mr. McKay says he never lost a dollar by building any one of his ships. His failure he attributes entirely to misplaced confidence. He has no cause of complaint against those for whom he has worked; they have all treated him generously. No man has been more encouraged or has had more devoted friends. As every step of his progress what ever merit he displayed, was promptly recognized and rewarded. Members of his own family have dug his grave; but he is determined not to lie down in it. Encouraged by Col. Train his first and best friend, and by many others, he hopes soon to resume his career of usefulness, and to show that he still lives.

Mr. McKay’s liabilities when he failed amounted to $240,000 and his assets to $375,000. Showings a balance in his favor of $135,000, but as this was monthly in real estate, and not immediately available, he had to unexpected loss of $80,000 which had been taken out of him by home influences. This large sum added to $35,000 which he had to an agent for less than two years service so exampled his energies, that his creditors deemed it best for all concerned that he should go into bankruptcy so that when he started again he aboard. All his creditors speak of him in the highest terms, and express their willingness to aid to the best of their ability.