It appears that the Boston Pilgrims nickname was the result of a poem and song. The 1906 season was a dismal failure (49 wins & 105 losses), with the player-manager fired, Jimmy Collins, and the new manager, Chick Stahl, committing suicide in the off season. On opening day in 1907, Edwin Fitzwilliam sang a poem to inspire the team at this festive event (April 16th 1907 Boston Globe, first three paragraphs):

The Pilgrims are back on the home ground today.
They've had sad experience since going away ?
They've lost their young captain, kind, honest Chick Stahl
Who got too excited to captain baseball!
"The old king is dead, (so it's) God save the King!"

Jimmie Collins was captain for many a year;
The strain on his strength and his mind was severe,
He twice won the pennant one and from all ?
Believed of his cares, he's playing pennant baseball.
Cy Young is as good as he ever was seen,
And so is big, brilliant and clever Dineen;
Lou Criger is catching and knows where he's at.
He watches the bases as well as the bat!

Ferris, while guarding his old second base,
Is setting a hair-raising, nerve-straining pace;
Unglaub and Wagner, both earnest in play,
Are gaining in confidence every day.
Buck Freeman is hitting as hard as he can,
And so is the ubiquitous Sullivan;
And last, but not least, the young student Jack Hoey,
Is swatting the sphere, like the broth of a boy!

The Boston Pilgrims nickname was often used during the 1907 season. After a decisive win in Chicago, the August 13th 1907 Globe states, "Pursued into their own lair by the demon Pilgrims, after suffering four separate and distinct whalings at the Hub, those much cuffed-about [White] Sox today made a stand today at the South Side preserves to no avail, with the invaders winning 5 to 3." The August 24th Globe referred to the team as "fast Pilgrims." A headline on page 5 of the September 11th Globe states, "Pilgrims Win First Game 5 to 0." During the next season, the August 8th 1908 Globe states, "McGuire has used two of his strongest cards since alighting here, but the Pilgrims have other pitchers of high degree, while Jones [opposing team manager] has about exhausted his stock of top-notchers." A probable final reference is in the March 29th 1909 Globe, with the headline "Red Sox Pilgrims Now In Nashville." There are about 30 Globe references in total using the Pilgrims nickname. 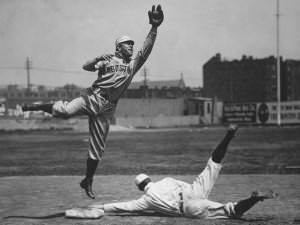 1907 was another dismal season with 59 wins and 90 losses. Club President John Taylor decided to revamp the team with new uniforms, new players, and a new team name, the Red Sox. The December 19th 1907 Globe describes the event: "Before leaving yesterday Mr. Taylor selected the uniforms to be used next season, subject to the approval of manager McGuire. Pres Taylor has suggested red stockings to be a part of the uniforms and thought the Boston 'Red Sox' might sound better to the baseball enthusiasts than the names now used by many, such as 'the Pilgrims,' 'the Yankees,' etc. The original Boston team wore red stockings and Mr. Taylor's idea is to practically reproduce the old colors. Cincinnati has the 'Reds,' and there have been several 'Red Stocking' clubs, but this is the first time any club has taken the name 'Red Sox'."

Further discussion about the new team name is described in the December 21st 1907 Globe: "'Pilgrims' sounded too much like homeless wanderers after the Bostons tumbled into seventh place, and they have been rechristened. Mr. Taylor says the bright red hosiery will be the sensation of the coming season. A place in the first division has been claimed for the 'Red Sox'."

One can infer that having many try-outs and rookie players in 1907 and 1908 may have helped support a Boston Pilgrims team nickname. A true Boston Pilgrim would have been a religious missionary or an explorer. And of course, Puritans settled Boston originally, while Pilgrims colonized Plymouth, which must have angered a lot of historians in 1907.

An amusing footnote is that during Spring training in 1908, the Red Sox team was temporarily divided into two separate squads. A Globe reporter (April 12th 1908) referred to the 1st squad as the "Red Sox" and also the "Pilgrims" (Cy Young's Team), and then referred to the 2nd squad as the "Boston American league second team" (Deacon McGuire's Team). That Spring, the Red Sox were also referred to as the "Americans," the "Bostons," and the "Regulars." It must have been very confusing in early 1908!

History books have also stated that the Boston Americans (Red Sox) were nicknamed The Puritans prior to 1908. This was most likely a geographic reference, and never a nickname. For instance, Boston versus Philadelphia would have been described as Puritans versus Quakers, and newspaper readers at that time would have known which teams and cities were involved (May 17th 1902 Boston Globe). Related, northern cities playing in the South were at times described as "yankees" or "invading yankees" in the newspapers, so the Red Sox were actually called Yankees at times!