Curse of the Babe

The Red Sox were 1918 World Champions. George Herman "Babe" Ruth was a pitcher and outfielder for the Red Sox. Ruth pitched an amazing 17 scoreless innings during that World Series. In 1919, the Red Sox finished in dismal sixth place in the American League. Babe Ruth smashed 29 homeruns that year, and also won 9 games pitching. The Red Sox had changed ownership in 1919, and the new owner Harry Frazee apparently needed to raise some cash. Frazee sold Babe Ruth to the New York Yankees for $100,000 and a $350,000 loan. 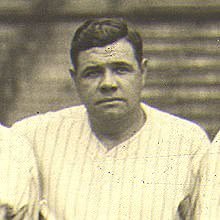 It wasn't until 1946 before the Red Sox appeared in another World Series. The Sox won 105 games in 1946, but could not win the Series. Ted Williams was shut down by St. Louis Cardinals pitching, batting only .200 in the match-up. In game seven, Enos Slaughter scored from distant first base when a single was hit, scoring the game and Series winning run.

In 1967, the "Impossible Dream" team made it to the World Series after several lackluster seasons. Carl Yastrzemski finished strong, batting nearly .500 in the last few weeks of the season. Yaz won the elusive Triple Crown that year, with the most Hits, Homers, and Runs Batted In. But the Dream Team could not prevail, and lost in six games to the St. Louis Cardinals.

In 1975, the Red Sox were led by Jim Rice, Fred Lynn, and Louis Tiant. They won 95 games and made it to the World Series. The Sox pulled out an extremely exciting 7-6 win in game six over the Cincinnati Reds, with Fred Lynn hitting a homerun in the 1st inning, Bernie Carbo in the 8th, and Carlton Fisk smacking the famous game winning homer in the 12th. But the Sox lost game seven and the Series, and the Curse of the Babe continued.

The Red Sox had a great year in 1986, winning 95 games. Team leaders include Wade Boggs, Jim Rice, Dwight Evans, Roger Clemens, and Oil Can Boyd. The World Series against the New York Mets was also very exciting. The Sox appeared to have clinched the Series in game six, as they were up by 2 runs in the10th inning. Three Mets singles and a wild pitch tied the game at 5. With two strikes against him, Mookie Wilson hit a single right through the legs of first baseman Bill Buckner and won the game [Buckner should have been relieved by a younger player.] The Sox then fell to the Mets in game seven after leading 3-0 early in the game.

The Curse was cruel. In 1972, the Sox finished a half game out behind Detroit, and earlier in the season a players strike had canceled several games. In 1978, the Sox finished the season in a tie with the New York Yankees which forced a playoff game. In the 7th inning, Yankees inauspicious batter Bucky Dent hit a 3 run homer and this lead could not be overtaken. The Yanks went on to win the World Series over the Dodgers that year. In 2003, the Red Sox were up by 3 runs in the American League Championship seventh game against the Yankees, and lost in the 11th inning to end the season.

At last, the Curse of the Babe was broken in 2004. Team leaders include Manny Ramirez, Johnny Damon, David Ortiz, Pedro Martinez, Derek Lowe, and Tim Wakefield. Accomplishing the near impossible, the Red Sox overcame a 3-0 game deficit against the Yankees in the League Championship Series, and swept the Yankees the next four to move on to the World Series. Momentum carried the day, and the Boston Red Sox swept the St. Louis Cardinals 4-0 in the World Series.

The Curse of the Babe lasted 85 years. Many fans had waited their entire lives to see the Red Sox win a World Series, and the curse was finally broken. Reverse the Curse shall never again be chanted by the loyal fans at Fenway Park.

Trivia: How did Babe Ruth get his nickname?
Answer: Ruth started his baseball career at age nineteen, and signed with the Baltimore Orioles (then a farm team). The team owner Jack Dunn was also a scout, and Ruth became known as "Jack's newest babe." The rest is history.