On April 15, 1911, Walter Johnson, the famous pitcher of the Washington Senators, struck out four Red Sox players in one inning. Baseball of course has only three outs per inning, and a fourth strikeout can only be achieved if a catcher drops the ball on the 3rd strike. This allows the batter to run to 1st base. The catcher must tag the batter or throw to first base before the player reaches it, or the base is gained.

If a batter strikes out with two outs in the inning and is then able to gain 1st base, then a strikeout is recorded but not an out.

This feat was also accomplished by Red Sox pitcher Tim Wakefield on August 10th 1999 against the Kansas City Royals. Wakefield was the relief pitcher, and struck out four players in the 9th inning. The Red Sox won the game 9 to 6.

Only a few pitchers have struck out four batters in one inning to tie the world record. It's nearly impossible, but maybe someday five batters will be struck out in a single inning! 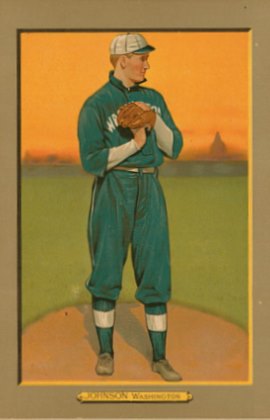