Copp's Hill Burying Ground was the second burying ground established in Boston, in 1660. It is near the Old North Church, and is about three acres in dimension. It was originally called the North Burying Place. The oldest part of the cemetery is on the northeast side of the Hull Street entrance.

There are many quaint epitaphs, some of which are illegible from age. Several famous people are buried at Copp's Hill. Edmund Hartt, builder of the frigate U.S.S. Constitution, is buried here. The Reverend Doctors Increase and Cotton Mather (Salem Witch hysteria), are buried here. There was also a small section that was reserved for African-American slaves and free Black persons near Snowhill Street [sadly, most markers are missing today, having been plundered for construction materials in the 1860's]. 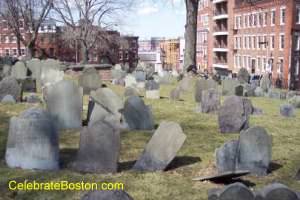 A triple headstone near the center of the cemetery marks the grave of the Worthylake family in 1718. Benjamin Franklin wrote a ballad called The Light House Tragedy, which commemorates this sad event.

During the Revolution, British soldiers occupied Copp's Hill as a military station. They found sport in firing bullets at the gravestones, the marks of which can still be seen on some of them. Their favorite target was said to be the stone of Daniel Malcom, a merchant, which bares the inscription, "A true Son of Liberty, a friend to the publick, an enemy to oppression, and one of the foremost in opposing the Revenue Acts on America." Malcom died in 1769.

When Copp's Hill was cut down, the burying ground was left untouched, and a high stone wall was built to support the embankment. The British batteries of 1775, which fired on Bunker Hill, were on the western slope of the hill between Hull and Snowhill Streets.

Walking Directions: Exit the station. Facing the TD Garden arena, walk to the right (east) down Causeway Street. Cross North Washington Street, there will be an old steel bridge on the left. Walk two blocks further east and take a right onto Hull Street. The burying ground is up the hill on the left. Alternatively, from Faneuil Hall, follow the Freedom Trail through the North End (about 25 minute walk).