Boston was a huge seaport, and eventually a melting pot. Irish immigration began in the late 1700s. Many Irish immigrated to Boston during the Potato Famine that occurred between 1845 and 1852 in Ireland. There was a lot of friction between English and Irish Americans, which smoldered in Boston for more than 100 years. This friction erupted quickly into what was known as the Great Broad Street Riot of 1837. Arguably, this ancient cultural stalemate ended symbolically with John F. Kennedy's victory over incumbent Senator Henry Cabot Lodge Jr., in 1952. The following is quoted from the 1838 Boston Almanac about the event:

On June 11 1837, a Great Riot [occurred] in Broad Street. It commenced between an engine company returning from a fire, and an Irish funeral procession. It has not been satisfactorily ascertained which party were the aggressors. The tumult increased to such a degree, that nearly a thousand persons, at one time, were supposed to be engaged in a brawl, the most desperate that ever occurred in this city. 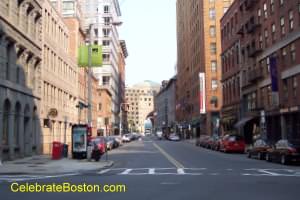 Several houses were broken into, furniture shattered inside, and cast into the street. Beds were ripped open and their contents given to the winds. Sticks, stones, bricks, and all manner of missiles, were discharged by the combatants at each other, with the utmost ferocity and yet, strange to tell, no one was killed in the affray. The military was called out, and in a strong body marched to the scene of action, and in a short time the rioters were dispensed or captured. Crowds were sent off to the Police Court; and at length, after the proper authorities had sifted the whole affair, it resulted in the sending of John Whaley for four months, and John Welsh and Barney Fanning each two months, at hard labor, in the House of Correction.

On June 15th 1837, seventeen persons, concerned in the Broad Street Riot, [were] ordered to recognize the sum of $300, [and] to appear at the next term of the Municipal Court. One American was held to bail, Mark Adams, a truck man, against whom the witnesses testified they saw him aiding in the sacking of the houses.

On June 18th 1837, the city [was] very quiet since last Monday morning. A military force was stationed at Faneuil Hall today (Sunday), to protect the armories, etc., and to act in case any disturbance should take place. Many Irishmen flock in from Lowell and other places. Their motives unknown. As the engines were returning from a fire in South Boston, some of the companies were assailed by hissing, hooting, etc. Many attempts were made during the day to kick up a row [brawl].

The Baltimore Sun quickly lambasted the enlightened ruling class of Boston for their hypocrisy—professing compassion for immigrants while underlying intolerance and ignorance led to outright civil unrest in this case.

Boston Today is a very diverse and tolerant city, having evolved for many years. The Great Broad Street Riot can still be considered the worst of such conflicts in the city's history.