The seven seas were extremely treacherous for sailing vessels to navigate for two millennia, and still pose a threat to the largest high-tech ships of today. In early America, there were many eyewitness accounts of sea serpents and sea monsters. In local folklore, the Nahant and Gloucester sea serpents were the most notable. The creatures were usually described as resembling gigantic water snakes, with horse-like heads and dark black eyes.

The following is a first-hand account by a sea captain sailing off the shores of northern Maine. One has to wonder if these sightings were merely whales mistaken as monsters, but many reports were made by credible witnesses. The Friday August 16, 1793 issue of American Apollo published at Boston describes a curious sea monster:

"Capt. Crabtree, who lately arrived, at Frenchman's Bay [Bar Harbor, Maine], and now in Portland gives the following extraordinary account of a sea serpent, the authenticity of which may be depended on: 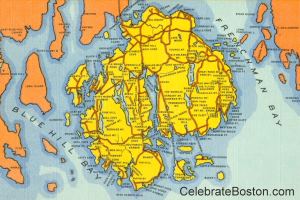 'On the 20th of June last, being on my passage from the West Indies, in the morning, having just made Mount Desert Island, distant nearly ten leagues, I suddenly got sight of a serpent of an enormous size, swimming on the surface of the ocean, its head elevated about six or eight feet out of the water, rather prone forward. That part of the body which was out of the water, I judged to be about the size of a barrel in circumference, but the head larger, having some resemblance of a horse's. According to the most accurate computation which I made in my mind, of his length, I think it could not be less than 55 to 60 feet, and perhaps longer. That part of the body which was not elevated, but of which I had a distinct view several times, was larger than the part out of the water. The body of a dark brown. I was within two hundred yards of it near an hour; during which time, as it was discovered no inclination to molest us, myself and the whole crew observed it with the minutest attention; nor was its attention less fixed on us. The eye was perfectly black, sharp, and piercing. I was so near it as to observe clearly that there were no fins or external appendages to the body; but that its motion was by the writhing of the body, like other serpents. During the time he was with us several flocks of birds flew near, which it eyed very narrowly. I observed in it the greatest agility and quickness of motion.'

There is no doubt but this is one of two which have been seen in these parts. All accounts agree respecting their size and appearance. Two of them (perhaps the same) were once seen on the shore of the Cranberry islands [Nova Scotia], but immediately took to the water on being discovered. These are the first ever seen in our seas, that we have any account of, though they have been seen on the coast of Norway, more than 100 feet in length." 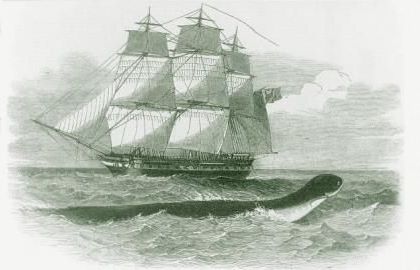