In the House of Representatives Hall of the Massachusetts State House, hangs The Sacred Cod. The cod is five feet long and carved in pine. The fish is suspended above the entrance to the hall in the visitors gallery, and the Speaker of the House faces the cod during the meetings. The Sacred Cod is a symbol of the bygone importance of the fishing industry in Massachusetts. The carved fish is more than 200 years old, and remains an ancient symbol of prosperity for the people in the state.

Cape Cod was named in 1602 by English explorer Bartholomew Gosnold, after he found a great abundance of the fish in the bay. The fishing industry peaked in Massachusetts in about 1840, with nearly 1300 total vessels and 12,000 employees. The largest shipping ports in the state at that time were Boston, New Bedford, Barnstable, Nantucket, Salem, Beverly, Newburyport, and Gloucester. The fishing industry provided great sustenance and prosperity in Massachusetts for many years. 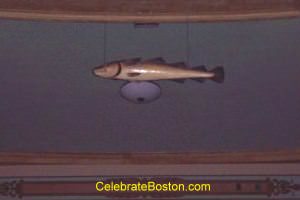 On March 17th 1784, Mr. John Rowe of Boston arose from his seat in the Hall of Representatives at the Old State House, and offered the following motion: "That leave might be given to hang up the representation of a cod fish in the room where the House sit[s], as a memorial of the importance of the Cod-Fishery to the welfare of the Commonwealth...."

A symbolic cod was placed in the hall, and was later moved to the new State House building in 1798. There it has remained ever since.

One notable event in the history of the Sacred Cod occurred in 1933. The fish was actually stolen or cod-napped by college students as a prank. The missing fish caused great reprehension and an investigation by the state police. After a couple of days, an anonymous tip led to the detection and return of this ancient symbol.

Massachusetts has many ancient traditions, with some dating back to Colonial days. Even today, when court proceedings begin, a court officer loudly announces to participants:

"Hear ye, hear ye, hear ye, please rise. All persons having anything to do before [court location], the justice of this court draw near, give your attention and you shall be heard. God save the Commonwealth of Massachusetts and this honorable court." 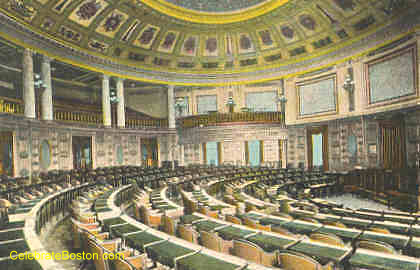