In 1639, America's first UFO was sighted over the Charles River in Boston. Lights sped back and forth across the Charles River from Back Bay Fens to Charlestown. Governor John Winthrop made an entry in his journal regarding this strange event. The primary witness was described as a man of good reputation, activity and estate in Boston:

"In this year one James Everell, a sober, discreet man, and two others, saw a great light in the night at Muddy River. When it stood still, it flamed up, and was about three yards square; when it ran, it was contracted into the figure of a swine: it ran as swift as an arrow towards Charlton [Charlestown], and so up and down [for] about two or three hours. They were come down in their lighter about a mile, and, when it was over, they found themselves carried quite back against the tide to the place they came from. Divers other credible persons saw the same light, after, about the same place." 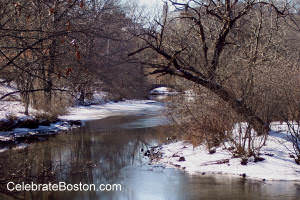 Muddy River is located at Back Bay Fens, opposite Cambridge, MA, and diagonally across from Charlestown. Back Bay wasn't filled-in at that time, and a large area of open water existed in the river that was then called Broad Bay. The distance to Charlestown would have been more than two miles.

James Savage added the following footnote about the sighting in his early edition of Winthrop's Journal (1825):

"This account of an ignis fatuus [pale light over marshy ground] may easily be believed on testimony less respectable than that which was adduced. Some operation of the devil, or other power beyond the customary agents of nature, was probably imagined by the relaters and hearers of that age, and the wonder of being carried a mile against the tide became important corroboration of the imagination. Perhaps they were wafted [carry lightly], during the two or three hours' astonishment, for so moderate a distance, by the wind; but, if this suggestion be rejected, we might suppose, that the eddy [whirlpool], flowing always, in our rivers, contrary to the tide in the channel, rather than the meteor, carried their lighter back."

Being objective about the sighting, the Charles River, prior to being dammed, had great tidal flow, and would drain much of Back Bay each day, and then replenish it. Muddy River likely had a larger volume of water flowing through it in 1639, but it is unlikely that a great eddy existed near its mouth. Thus, it is unusual for witnesses to assert they were unmoved by tidal flow (in a small boat) for more than two hours.

Witnesses also stated that the lights contracted into the shape of a swine. Muddy River, the hamlet, eventually became the separate town of Brookline. Pigs and other cattle were stored there during summer while corn was growing in Boston. It is safe to deduce that the UFO witnesses had seen or heard swine on the same day they observed the great light. Thus, the lights resembled a common animal, making it probable they saw ignis fatuus mirage phenomena in the darkness.

In any case, the event was observed by divers (many) people, and noteworthy enough for the Puritan Governor to document it in his private journal.

In 1644, the first USO sighting occurred over Boston Harbor, and then a major UFO sighting took place at New Haven, CT, in 1647.