Old City Hall is located on School Street. It is three stories in height, and built of white granite. The structure is of French Second Empire design, with a central rectangular tower and mansard roof.

The corner stone was laid December 22, 1862 with Masonic ceremonies, and its dedication took place September 17, 1865. Gridley J. Fox Bryant and Arthur Gilman were the architects. Mayor Joseph Wightman had initiated the project. 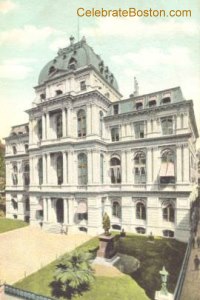 The Mayor and Alderman's room was located in the second story, and was forty feet square and twenty feet high. The Common Council Chamber was located in the third story above the Alderman's room, and was forty feet square and twenty-seven feet in height. The Chamber room contained galleries on three sides, and was capable of seating two hundred and fifty persons. The original cost of construction was about five hundred thousand dollars.

City government moved to the current City Hall building in 1969, and Old City Hall was then completely renovated in 1970. Unfortunately, the Mayor and Alderman's room and the Common Council Chamber were both eliminated during this renovation to make way for private office space.

A statue of Ben Franklin stands on the west side of the front courtyard, and a statue of Mayor Josiah Quincy stands on the east side. Boston's historic Freedom Trail passes in front of Old City Hall.