There were many brave men at the Battle of Bunker Hill on June 17, 1775. Among them was Peter Salem, an African-American from Framingham, Massachusetts. Salem was a slave and had been given his freedom in exchange for enlisting in the provincial army. He was noted for great bravery at the battle.

Peter Salem is believed to have killed British Major John Pitcairn, in the redoubt and at the height of combat. In John Trumbull's famous painting Battle at Bunker's Hill shown below, Major Pitcairn is dying under the British flag, while being held up by his son and another British officer. 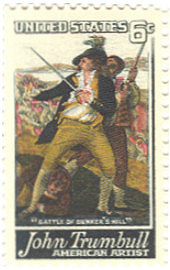 John Trumbull had enlisted in the provincial army, and was at Roxbury during the battle. He had interviewed many of the participants from this important event. Peter Salem is believed to be represented in Trumbull's painting. Salem is at the far right, observing the carnage, and the death of General Warren. The image of the postage stamp (left) shows Salem behind an American officer, and the image below is of the entire painting, with Salem on the far right. Trumbull's painting faces east, which meant that Peter Salem would have been one of the last Americans to retreat north after the redoubt was overwhelmed by British forces. Most of the American losses occurred during this retreat.

From History of the Colored Race in America by William T. Alexander (1887), Salem is mentioned: "At the battle of Bunker Hill, Peter Salem, also a colored man, who so gallantly manned and defended the slight breastworks, shot dead Major Pitcairn, of the British Marines, who, in the final struggle, had scaled the redoubt and shouted 'The day is our own!' and was commanding the patriots to surrender, thereby probably gaining the battle." Peter Salem also served at Saratoga and Stony Point.

It is important to note that many African Americans participated in the Revolution on the American side. There was little indication slavery would be abolished in the new republic, and in Virginia the British had even recruited slaves promising eventual freedom (Britain completely abolished slavery in 1833).

Salem Poor was another African-American soldier that served at Bunker Hill. 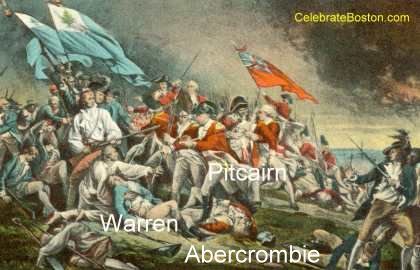