Colonel Prescott was given command of the forces at Charlestown by the Committee of Safety in Massachusetts. Joseph Warren was appointed the rank of Major General by the Provincial Congress, as the United States was still unborn.

Just before the Battle of Bunker Hill, Warren appeared at the front line. General Putnam offered to receive orders from Warren, and he replied, "I am here only as a volunteer...tell me where I can be most useful." Putnam directed him to the redoubt, the most barricaded dirt-works on the hill, and relatively protected. Warren said, "Don't think I came to seek a place of safety, but tell me where the assault will be most furious." Again Putnam stated the redoubt, and with musket in-hand Warren moved to his post. The men at the redoubt were somewhat disheartened until then, as reinforcements had not arrived, and Warren's appearance was very encouraging. 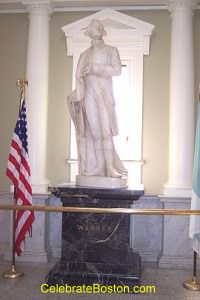 The British forces made three attempts to take the hill, with the first two assaults repelled by the Americans at huge costs to the British. The American forces, weakly supplied with mostly "fowling" muskets without bayonets, were down to about 3 musket balls apiece by the third assault. The British Generals discerned a weak spot on the line, waited to receive reinforcements, and then stormed the hill again. The Americans were surrounded on three sides when Colonel Prescott gave the order to retreat. A brave fight ensued with muskets being of no use due to close quarters. The men without bayonets fought with their musket stocks, and hand-to-hand combat ensued.

Prescott and Warren were among the last to abandon the hill, all the while rallying the troops. A British Officer recognized Warren, pulled a musket from one of his soldiers, and fired at his back. Warren was shot in the head and killed instantly.

A wooden Tuscan Pillar memorial was erected by the Masons in 1794, and a stone replica is now at the base of the monument today. A statue of Warren is in the building next to the monument, and was sculpted by Henry Dexter in 1857. Warren was 35 years old when he was killed, and his death caused great sorrow.

The brave men at Charlestown gave notice to the British that liberty is priceless and the Americans would fight for it.