"Robert Gould Shaw, soldier, was born in Boston, Massachusetts, October 10, 1837, son of Francis George and Sarah Blake (Sturgis) Shaw, and grandson of Robert Gould Shaw of Gouldsborough, Maine., and of Boston, where he founded an asylum for mariner children.

His father, whose home was at New Brighton, Staten Island, after 1847, was a prominent philanthropist and promoter of reforms.

George William Curtis, Francis C. Barlow, Charles Russell Lowell and Robert B. Minturn were his brothers-in- law; and young Shaw grew up in an atmosphere that was not only conducive to culture and the highest refinement, but to intense patriotism, also, and the attainment of that spirit of consecration to principles that leads to the giving up of life. 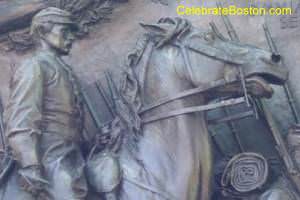 Manly, healthy, high-spirited, simple-hearted as a boy, he increased in worth as he advanced in years; his exceptionally winning manner, his faculty of entering with true sympathy into the feelings of others, his influence quietly exerted along the noblest lines of action, giving him more and more prominence among his fellows. He had a marked love for music and for literature, and in the gratification of these and like tastes had all the encouragement that devoted parents could give.

He entered Harvard College in 1856, but left in 1859 and entered a counting-room in New York city, preparatory to becoming a merchant. Foreseeing troublous times and peril to his country, he enlisted in the 7th regiment and departed with it for Washington on April 19, 1861. Before his term of service expired, he took a commission (May 28th) as second lieutenant in the 2nd Massachusetts regiment; was promoted to first lieutenant Massachusetts regiment; was promoted to first lieutenant July 8th, and rose to the rank of captain, August 10, 1862. He passed unscathed through engagement after engagement, though barely escaping death at the Battle of Winchester, and was still in active service in the spring of 1863, when he received the appointment of colonel of the 54th Massachusetts, the first [African American] regiment sent into the field from the free states.

Having decided to employ blacks as soldiers, Governor Andrew determined to place at their head "only gentlemen of the highest tone and honor," and Captain Shaw was the first selected. The appointment was made on February 3rd, and was declined; but three days later, the young captain accepted, prompted by a sense of duty, and returning to Massachusetts, he began the work of filling the ranks of the regiment and then of drilling and disciplining them in their camp at Readville. On May 28th he marched through Boston at the head of his soldiers, and the scene presented is said to have been one of the most thrilling of the war.

The 54th acquitted itself well in a skirmish on James island, S. C., on July 16th, and Col. Shaw requested to have it brigaded with the white troops under Gen. George C. Strong. The request being granted, he set out to join the main force at Folly and Morris islands; a new attack on Fort Wagner having been planned. The assault was made about eight o'clock on the 18th, and was participated in by six-regiments, the 54th being formed into two lines, Co!. Shaw leading the right wing in front. "We shall take the fort or die there!" he exclaimed, and in the same spirit his men followed him up the rampart, breaking and reforming under the terrible fire that met them, until the summit was reached and there, waving his sword, the young hero fell.

The regiment, with more than half its officers killed or wounded and with its ranks reduced nearly one half, was then withdrawn, and the brave colonel's body was left to be "buried with his n- [racial slur]," as the commanding officer of the fort expressed it. General Gillmore offered to have it recovered; but Colonel Shaw's father requested that it be left in its honorable grave, and not many years later, the sea, by its encroachments, washed away the trench that was the tomb of officers and men.

In 1865 a committee of the citizens of Boston, headed by Gov. Andrew, took steps to erect a monument that should typify patriotic devotion, and it was decided that the figure of Col. Shaw, as best embodying that idea, should be made the central one of the sculpture. By 1884 the fund had become sufficient to procure a memorial of the highest artistic merit, and Augustus St. Gaudens was given the commission. The monument, unveiled in 1897, stands on Boston Common, opposite the State House, and among its inscriptions is "Omnia relinquit servare rempublicam" [He relinquished everything to serve the Republic,] the motto of the Society of the Cincinnati, of which Col. Shaw's father was a member. Also, a bust by Edmonia Lewis, the African American sculptor, was placed in Memorial Hall, at Cambridge, and a tablet in the same building, also perpetuates his memory.

Colonel Shaw was married May 2, 1863, to Anna Kneeland Haggerty, who never remarried after the death of her husband."