Robert Treat Paine (1731-1814) was a statesman, patriot, judge, and signer of the Declaration of Independence as a representative of Massachusetts.

"The love of liberty and the oppressions of those in power, first induced the pilgrim fathers to plant their standard on the granite shores of New England. They were not a band of visionary unprincipled speculators, but a band of intelligent, virtuous, pious, patriotic and enterprising citizens, who were, from the commencement, willing to risk their lives and fortunes in the cause of human rights.

The early forms of government adopted by many of those infant settlements, were remarkably similar to those now in operation. The principles that actuated the patriots of the revolution were recognized and taught by many of the earliest immigrants. Although, in consequence of the charters emanating from the King, an allegiance was recognized, yet the people never intended to have those chains riveted upon them from which they had fled, nor surrender tamely the rights and privileges given them by the God of nature, and rendered more dear by years of toil and fountains of blood. 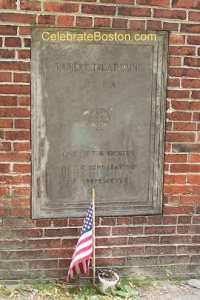 To understand, appreciate, and guard these blessings, they correctly deemed intelligence the first grand requisite. Upon this principle they started, upon this principle they lived, and their happy example soon spread its benign influence far and wide. Hence, we find more intelligent, wise, reflecting, consistent, cool and deliberate men embarked in the cause of the American Revolution than in any other recorded on the pages of history.

Holding a conspicuous place among them, was Robert Treat Paine, a native of Boston, born in 1731, of highly respectable and religious parents. His father performed the duties of a clergyman until his health became impaired, when he embarked in the mercantile business. His mother was the daughter of an eminent divine, the Rev. Mr. Treat, of Eastham. From these pious parents he received those principles of virtue that enabled him to be useful through future life.

Were there no other blessings flowing from religion than its salutary influence upon the order and harmony of society, mankind would be richly paid for adhering to its principles. At an early age, Mr. Paine was placed under Mr. Lovell, a classical teacher in Boston, where his embryo talents rapidly expanded into a rich and luxuriant growth. At fourteen he became a student at Harvard College.

After closing his studies at this ancient seat of learning, his parents, not only unable to aid him in business, required his assistance to render them comfortable. He, therefore, before commencing the study of a profession, employed his time for some months in teaching a public school, a business as honorable as it is useful, and which in point of dignity and compensation is now far inferior to the days of Greece and Rome.

Mr. Paine continued this business at intervals, which enabled him to contribute to the support of his worthy parents and a maiden sister, whose health were impaired, and also to pursue the studies of his profession. He commenced the study of theology, but ultimately read and entered upon the practice of law. He first appeared at the Boston bar, and from there removed to Taunton, in the county of Bristol. He there acquired a firm and substantial eminence as an acute, sound and discreet lawyer and able advocate. He enjoyed the confidence and esteem of his numerous acquaintances. He was among the earliest patriots who opposed the innovations of the crown and boldly advanced liberal principles. He was a member of the conventions of 1768, called by the citizens of Boston, to take measures for the preservation of their sacred rights, and which Governor Bernard vainly attempted to disperse before they completed their deliberations.

He was employed, at the instance of Samuel Adams, by the people of Boston to conduct the prosecution against Captain Preston, for ordering his men to fire upon the populace on the 5th of March, 1770, which duty he discharged with great zeal and ability. During the gathering storm of the revolution, Mr. Paine was uniformly upon the important committees of the people, and many of the boldest resolutions that were adopted at the meetings and conventions of that trying period were from his pen. In 1773, he was chosen a representative to the General Assembly, and was one of the members who conducted the impeachment of Peter Oliver, Chief Justice of the province, who was accused of acting under the direct influence of the crown instead of the assembly. In this trial, Mr. Paine manifested strong talent, and showed himself master of his profession.

In 1774, he was again elected to the assembly, and boldly warned the people against the dangers to be apprehended from the appointment of Governor Gage to succeed Governor Hutchinson. It was plainly seen that the designs of the British ministry were to be enforced at the point of the bayonet. An awful, alarming crisis was approaching. A committee, larger than at any previous time, was convened at Boston, which advised and proposed the plan of a General Congress.

Governor Gage sent a messenger with an order for them to disperse, to whom they refused admittance until they finished their deliberations, which resulted in the appointment of five delegates, one of which was Mr. Paine, to meet those from the other colonies at Philadelphia.

This measure originated in Massachusetts, and had been proposed as early as 1765, and was strongly urged in a circular three years after. The set time had now arrived — the galling yoke had become painful — and the colonies generally acceded to the proposal. The ostensible object in convening this Congress was, not to effect a separation, but to obtain a relaxation of the severities imposed by the crown. It is believed a large majority of the members when they assembled had never contemplated a Declaration of Independence; but among them were bold and ardent spirits, noble and patriotic hearts.

As one of those, Mr. Paine stood conspicuous. Their language continued to be respectful to the crown, but their chartered rights they were determined to defend and protect. They did not attribute their sufferings to a bad heart in their king, but to the ambitious avarice of a corrupt ministry. Their proceedings were calm as a summer morning, but firm as the rock of ages. They appealed to their sovereign, to the British Nation, to the American people, and to a gazing world for the justice of their claims and the equity of their demands. But to Britain they appealed in vain.

The cords of coercion were drawn with a stronger hand — their remonstrances and petitions were answered by legions of foreign soldiers, in all the panoply of war — and servile submission or open resistance were the only alternatives left. Mr. Paine was also a member of the Provincial Congress of Massachusetts, convened at Concord, in October, 1774, and was the principal in preparing a spirited address to the people of England, which did much to open the eyes of many in the mother country, and rouse the colonists to a just sense of the injuries of the British parliament.

The following year he was again elected a member of the Continental Congress, and was placed upon many important committees. He was as indefatigable in his labors as he was zealous in the cause of human rights. He was chairman of the committee for the encouragement of the manufacture of arms and for furnishing the army. He used to say, 'I fear we shall become slaves, because we are not industrious enough to be free.'

When the glorious 4th of July, 1776, dawned upon Columbia's son's like smiling heaven, and the eagle of Liberty soared in peerless majesty over their blood-stained soil, Mr. Paine was at his post. With a buoyant heart and a firm hand he affixed his name to that matchless instrument which is a terror to tyrants and the pride of freemen. He did much to rouse his friends to action by his letters, which he poured upon them in the most happy style. In his native state he stood on the pinnacle of fame — in the national legislature he was universally esteemed.

He still continued [as] a member of Congress, and, when he could be spared, took a part in the legislative proceedings of Massachusetts. In 1777, he was speaker of the House of Representatives, and the same year was appointed Attorney-General, by the unanimous vote of both branches of the legislature. He was a prominent member of the committee who formed the 'regulating act' reducing the price of labor, goods, etc. to a standard of equality.

In 1779, he was elected a member of the executive council, which, in conjunction with his other appointments, imposed upon him constant and arduous duties. At the adoption of the constitution, he was re-appointed Attorney-General of his native state, and continued in that office until 1790, when he declined, in order to pursue some more lucrative business that he might provide for the wants of a large and destitute family. He had been a faithful public servant and had expended all but a bare and scanty support in the cause of his country.

He was then appointed a judge of the Superior Court, which situation he held until 1804, when his health compelled him to resign. He discharged the duties of this office with great justice and ability, and did much to advance the interests of religion, social order and a sound state of society. On his resignation, he was elected a Counselor of the Commonwealth, and continued to impart his salutary advice and influence to his fellow citizens until death closed his career on the 11th of May, 1814, when, calm and resigned; he fell asleep in the arms of his glorious Redeemer, reposing full confidence in His merits, and possessing a full assurance of a welcome entrance into realms of transcendent bliss beyond the skies, there to enjoy the rich reward of a crown of unfading glory through the rolling ages of eternity.

Paine was entombed at Granary Burying Ground in Boston. His marker is in the center of the north wall of the cemetery.