Samuel Sprague was born in Hingham, Massachusetts on December 22, 1753, and died at Boston on June 20, 1844. Just before the Revolution, he was a member of the famous Boston Tea Party that threw overboard a cargo of tea into Boston Harbor.

From a history of the Boston Tea Party by Francis S. Drake, "[Sprague] was a  mason by trade, and was athletic and tall of stature. His share in the tea party he thus related to his son: 'That evening, while on my way to visit the young woman I afterwards married, I met some lads hurrying along towards Griffin's wharf, who told me there was something going on there. I joined them, and on reaching the wharf found the Indians busy with the tea chests. Wishing to have my share in the fun, I looked about for the means of disguising myself. Spying a low building, with a stove-pipe by way of chimney, I climbed the roof and obtained a quantity of soot, with which I blackened my face. Joining the party, I recognized among them Mr. Etheredge, my master. We worked together, but neither of us ever afterwards alluded to each other's share in the proceedings.' "

Sprague was also a soldier of the Revolution, participating in the siege of Boston, and the battles of Trenton and Princeton.

Part of his military service record is as follows:

December 16, 1775, return of men that enlisted for the ensuing year under the new establishment, at Roxbury Camp; Captain Pierce's Company, Colonel Gridley's Regiment.

Other records indicate the service of a Samuel Sprague at various times during the years 1777, and in 1781 through 1783.

Please note that Richard Gridley designed the Provincial earthworks at Bunker Hill, and Sprague may have served at that battle.

Samuel Sprague was married on July 9, 1778, to Joanna Thayer, of Boston, a daughter of Obadiah Thayer, born September 10, 1756 in Braintree. Their fourth son, Charles Sprague, became a famous poet in the nineteenth century, and at times was referred to as the [Alexander] Pope of America. They lived in a house on Orange (now Washington Street).

The Sprague family tomb is Number 5 at Central Burying Ground, and can be viewed from the walkway on Boston Common, near the Charles & Boylston Street entrance. 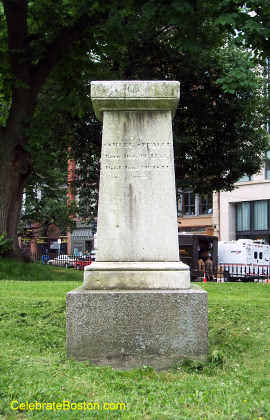