In 1976, the Boston Celtics faced off against the Phoenix Suns in the NBA Finals. The Suns had just knocked out the defending champions, the Golden State Warriors. The Celtics were the heavy favorite while the Phoenix Suns were the gutsy "Cinderella" team. With the series tied 2-2, the table was set for game 5 at the Boston Garden. Game 5 is most often voted the greatest game in NBA history, due to a marathon battle that took place between the two teams that was eventually decided in triple overtime.

On June 4, 1976, Game 5 began with the Celtics grabbing a huge 36-18 lead after the first quarter. The Celts held a 16-point lead into the half, and looked poised to take a 3-2 series lead. The Suns remained resilient, and by the end of the third quarter they cut the Celtics lead down to five. At the end of regulation time, it was a 95-95 tie and the game had to be settled in overtime. 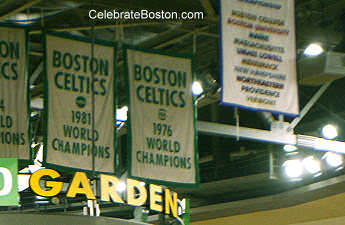 The first overtime period was a defensive battle, as each team only managed to score 6 points. By this point, the 15,320 people in attendance knew they were in for a classic finish.

During the second overtime, the players became exhausted and grew frustrated that the game would not end. Tensions were running high as Phoenix took a 110-109 lead with six-seconds left, but the Celtics’ John Havlicek responded with a drive and a leaning one-hander in traffic that put Boston in front 111-110 as the buzzer sounded. Fans poured onto the court in celebration of the apparent win for the Celtics, the players were on their way to the locker rooms when mayhem broke out on the court.

TV announcer Rick Barry pointed out that the ball went through the hoop with two seconds left and the clock should have been stopped. The officials agreed and ordered the players back onto the court. A technical free throw by Boston's Jo Jo White increased the lead to 112-110, and Phoenix's Garfield Heard took the inbound pass from Curtis Perry and made a buzzer-beating shot to tie the game.

Triple overtime began, and fans were still enraged on how the second overtime ended. Boston's star forward Paul Silas fouled out of the game with 3:23 left in the third overtime period, and in came seldom used reserve Glenn McDonald. McDonald proved to be the difference for the Celtics as his 8-point spurt in the third overtime put the Celtics over the hump. The Suns could not recover from the offensive roll McDonald provided off the bench. The Suns would not go out without a fight however, with Boston up 128-126 with 12 seconds to play, Phoenix’s Paul Westphal got his fingertips on a looming pass intended for Boston's Jim Ard. It was a close call, but Ard was able to keep possession of the ball and ran out the clock to seal the Boston win.

The Boston Celtics would eventually win the series in six games and crowned themselves 1976 NBA Champions. Boston point guard Jo Jo White won the finals MVP. Eight players in this game would go on to be NBA head coaches: Pat Riley, Don Nelson, Dave Cowens, Paul Westphal, Garfield Heard, Dick Van Arsdale, and John Wetzel. However, the game will be remembered for being the greatest NBA game ever played.