On October 23, 1989, after attending child-birthing classes at Brigham & Women's Hospital in Boston, Charles Stuart shot his pregnant wife in the head while driving to the nearby Mission Hill neighborhood in Roxbury. Carol DiMaiti Stuart died a few hours later, with their unborn son Christopher delivered by C-section. Stuart shot himself in the abdomen to conceal his crime, and told police officers that a black man had robbed and shot them both. Police quickly performed sweeps in the African-American neighborhoods of Boston, causing a large uproar and charges of racism in the city. Suspicion eventually fell upon Chuck Stuart, and he committed suicide by jumping off the Tobin Bridge only weeks after the murder.

By coincidence, a real-TV show called Rescue 911 was filming in Boston that night and captured the crime scene and subsequent events on videotape. Stuart owned an early cell phone, and after he had presumably passed out, police located his vehicle by strategically sounding sirens from nearby patrol cars, while listening to the open microphone of his cell phone. Carol DiMaiti was slumped over in the front seat of their Toyota Cressida, while Chuck was propping himself up on the back headrest in the driver's seat. EMTs extricated them both from the vehicle. As Chuck was being placed in the ambulance on a gurney, he asked the EMTs how his wife was doing, and told police that a black man had shot and robbed them. Carol died a few hours later. The Stuart's unborn son Christopher was delivered by C-section, and died 17 days later of respiratory failure. Chuck underwent emergency surgery to repair damage caused by a bullet that traversed his abdomen. 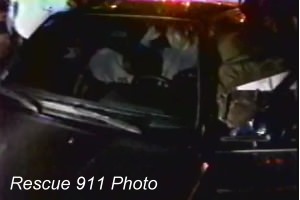 Stuart remained in the hospital for several weeks, and did not attend his wife's funeral. He wrote a deceivingly heart-felt letter that was read aloud at her funeral by a friend: "Now you sleep away from me. I will never again know the feeling of your hand in mine, but I will always feel you. I miss you and I love you.... In our souls, we must forgive this sinner because [God] would too."

Police immediately swept through the local African-American neighborhoods, and questioned several hundred black men. A 39-year old black man was named as the main suspect, and was held in jail on unrelated charges. After his release from the hospital, Stuart picked this man out of a police line up and proclaimed that he was the shooter. Boston by 1989 had greatly mended from the racial tensions of the 1970s, but the wounds of racism and racial discrimination were opened up again by this shocking murder. Mission Hill had an extremely violent summer the year before, and there was almost a witch hunt atmosphere to capture the alleged black man that killed Carol DiMaiti.

Chuck Stuart's ruse began to unravel at the end of December. One of his brothers went to police and told them he was involved in the crime. The brother had parked his car in Mission Hill before the murder, and after Chuck shot Carol, he tossed her handbag and jewelry into his brother's car to trick police into believing that a robbery had occurred. The pair completed a dry run the previous night, with his brother believing that an insurance scam was going to be the result.

On January 4, 1990, soon after Chuck Stuart had found out his brother had gone to police, he drove to the Tobin Bridge, parked his car, and leapt 135 feet to his death.

Charles Stuart's motive was money. He received the proceeds of a $100,000 insurance policy after leaving the hospital, and had allegedly paid cash for a brand new Nissan Maxima. He apparently did not want to be burdened with a child, and thought his wife would not be able to return to her lucrative law practice after their son Christopher was born. Chuck also had aspirations of owning an upscale restaurant on Newbury Street (he sold furs there as an occupation).

Looking back these many years, the police investigation was a disaster. They blindly believed Chuck Stuart's story. They touted Chuck Stuart as a hero because he was so coherent when EMTs attended to his injuries that fateful night. They did not investigate the possibility that Chuck had contrived the entire event. They swept through the African-American neighborhoods looking for a black suspect. The fact that Stuart had a bullet wound across the abdomen—a strange injury for a third-person to cause—should have created suspicion about his story. Merely watching Rescue 911 reveals other obvious pieces to the puzzle: Stuart said he "ducked" [away from a bullet] while talking to police on his cell phone; Carol's visor in the car was down although it was late at night; clothes were hanging in the back of the car that obscured the inside; he calmly told police in the ambulance that a black man—with little description—had shot him; and at the hospital he abruptly said "no" when a doctor asked him if he would like a staff person to call anyone for him.

Let us not forget the victims of this extremely shocking, tragic, and premeditated murder: Carol DiMaiti Stuart and their son Christopher. A charitable foundation was established by Carol's parents on January 25, 1990 in her memory. Its goal is to provide scholarship assistance to young people from Boston's Mission Hill area and to fund activities involving the amelioration of racism and violence in Boston.