In 1849, George Parkman and John Webster were prominent doctors in Boston. Dr. Webster was in debt to Parkman, and when Parkman threatened to take legal action to collect this debt, he killed Parkman. Webster dismembered the body, and then tried to incinerate it completely. The murder occurred early in the Brahmin Era, and was extremely shocking for its day. Parkman's house still stands on Beacon Hill on Walnut Street. A column in the November 27, 1912 Boston Globe by Harry V. Lawrence summarizes the crime:

"Dr. Webster killed George Parkman on Nov. 23, 1849, in the Massachusetts Medical College Building on North Grove [Street] at Boston. On Jan. 25, 1850, the Suffolk County Grand Jury returned an indictment against Dr. Webster, and he was put on trial March 19, 1850, before the Supreme Court in the city of Boston. Dr. Parkman was last seen alive at 1:45 p.m., [as] he was entering the Massachusetts Medical College. 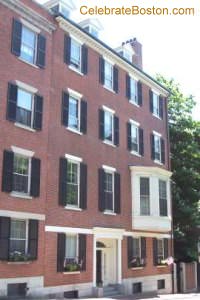 On Nov. 30, 1849, in a vault connected with the chemical laboratory, a portion of a human body, and with it certain towels belonging to Dr. Webster were found, and in the grate of the furnace, pressed into the cinders, certain bones, parts of mineral teeth, and pieces of gold were located. A little later other parts were found in a tea chest. Dr. Keep, a dentist, identified the teeth as made by him for Dr. Parkman.

About this time Dr. Webster was in such a financial condition that all his property was under mortgage to Dr. Parkman, and on Nov. 12 Dr. Parkman had threatened him with a trustee process. ... On April 1, 1850, Dr Webster was sentenced to death by Chief Justice Shaw and be hanged at 9:40 a.m. on August 30, 1850 [which was carried out]. ... Dr. Webster was a very prominent man, and was master of arts and doctor of medicine at Harvard University; member of the Massachusetts Medical Society, and was connected with the American Academy of Arts and Sciences.... Dr. George Parkman was also a very prominent man, and was a master of arts of Harvard University, doctor of medicine of the University of Aberdeen, and a member of the Massachusetts Medical Society."

Less known about the murder was the intrigue after the sensational Webster Trial. An article in the November 23, 1884 Boston Globe discussed the possibility that Webster was placed in a harness, and was never hanged. A story is re-told about a sailor seeing Dr. Webster in Fayal (or Faial), Azores, long after his death sentence. Other witnesses describe how Webster's body was moved from the gallows site, and was going to be brought to a neighbor's house. There was a concern his body would be stolen and security precautions were taken. The article also asserted Webster's body was placed in Copp's Hill Burying Ground in his father's tomb (and not Mount Auburn Cemetery).