A very shocking Hate Crime occurred in Boston on June 4, 1973. George Pratt, a 17-year old African-American man, resided at the D-Street Housing Project in South Boston. Pratt had taken a cab from Roxbury to his home in Southie, and after leaving the cab was accosted by two white men. Bottles were thrown at him and racial slurs shouted. A few minutes later, Pratt was shot by a sniper from a nearby rooftop, and was essentially executed due to the color of his skin.

George Pratt was described as "quiet." He did not have a reputation for causing trouble in the housing project. In 1973, D-Street was on the decline, and families living there, of all races, often felt it to be alienating. Violence, vandalism, and general mayhem were considered part of living in the project (as was the case in other projects). But at D-Street, non-white families were singled out, with most unable to leave their apartments at night on threat of violence. A white person complaining about whites could lead to a brick through their window. An African-American or Puerto Rican person complaining about whites could lead to serious personal injury or even death. 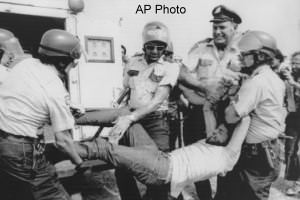 At around midnight on June 4, 1973, George Pratt got out of a taxi cab, walked to his house, and then momentarily returned to the cab. Two men, then across the street, shouted racial slurs and each threw a bottle at him. Within the next half-hour, four shots rang out. Pratt was standing in front of his house, and was fatally shot in the forehead with a rifle. A witness described him as standing against a wall, and after hearing two shots he initially thought Pratt was fooling around, until he slumped down. When the third and fourth shots rang out, the witness fled the scene in fear of his life.

Several witnesses came forward to police, but most recanted due to fear of their own lives. Only one witness, a 14-year old teenager, testified at the trial. On October 20, 1973, two South Boston teenagers were convicted of manslaughter by an all-white jury for Pratt's death, but they successfully appealed the verdict and were acquitted at a second trial. The witness had a juvenile record, which was not made available to the defense by the prosecution, and caused the initial manslaughter conviction to be thrown out. On October 9, 1975, a second jury comprised of 7 women and 5 men acquitted the two men accused of killing George Pratt. The jury apparently did not believe the testimony given by the sole witness.

Another huge tragedy about George Pratt's death is the tremendous guilt felt by his mother. She did not blame the Boston Housing Authority for not finding her family an apartment outside of South Boston; she did not find fault with the BHA for not securing the rooftop door that allowed a sniper to kill her son; and she did not complain about being a prisoner in her own home due to the culture of the time. Minnie Pratt condemned herself for the loss of her son, which is an incredible burden for a mother. Over the years she had said, "If I haven't been living out here [at D-Street], my son would be alive today. The guilt I have for myself, I'll always have that." And that she thought about him every day, "It won't go out of my mind…I live sad."

In 1973, Boston was in racial turmoil, with hate crimes occurring by whites against blacks and blacks against whites. The roots of racial hatred in Boston were socio-economic. Boston did not have an industrial base in the 1960s, and poor whites competed against poor blacks for the lowest paying jobs. A handful of politicians and activists exploited the situation, and caused great racial tension in the city until the early 1980s. White activists asserted that the quality of schools in the white neighborhoods would decline if blacks were bussed in, but all the while knowing that the black schools had been underfunded for more than a decade. Such assertions (and protests) incited hatred of blacks, and vice versa. It is a dark period in Boston's history.

This author gives great credit to Mel King for mending race relations in Boston in the early 1980s. King would give speeches during his mayoral candidacy, and afterward walk the neighborhood and talk to anyone that would engage in conversation. His pride as an African-American, and as a Bostonian, was conveyed in his visits to the neighborhoods. King initiated much discourse for better schools, housing, and jobs for everyone, regardless of race. If we had such leaders in the 1960s, the busing crisis might never had occurred.

George Pratt is not forgotten, as well as others, who lost their lives during the racial crisis of the early 1970s. The equally shocking Evelyn Wagler murder also occurred in 1973.