Whatever possessed the MDC (predecessor to Mass DCR) to allow Green Day to be booked at the Esplanade in 1994 is bewildering. Green Day was an up and coming "punk-popster" band, with self-deprecating lyrics, and a reputation of creating mayhem at its concerts. The result was a confrontation with police and subsequent riot.

On the evening of September 9, 1994, the Esplanade was packed with students and teenagers. The obscure band Green Day was booked by WFNX Radio for the Hatch Shell venue, prior to the band appearing on the MTV Music Awards show, and achieving great fame. FNX branded the event as the Welcome Back Weekend show for returning college students, and featured bands The Meices at 7:00 pm and Green Day at 8:15 pm. Low barricades were set up as a buffer-zone between the fans and the stage as usual. Only 40 or so state troopers and a private security force were on hand in case the fans got rowdy. 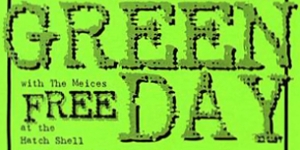 In anticipation of the concert, a large mosh-pit opened up in front of the Hatch Shell. What started out as a typical Generation-X style crowd-bump, quickly turned into a violent '70s style slam-dance. Much of the crowd in the pit were intoxicated, as the moshing got entirely out of control. Concertgoers started to get pushed up against the railing, and had to be helped (or removed) by security to escape the violent dancing.

One of the members of Green Day had asked the crowd to calm down, which temporarily helped. About twenty minutes into their set, some of the crowd started to rip up flowerbeds, and also throw Snapple bottles at the stage. The lead singer, Billy Joe Armstrong, then jumped off the stage and tore up flowers himself, and the band was cut-off mid-song and the concert canceled.

The September 10, 1994 Boston Herald describes the riot: "Requests for the crowd—estimated by State Police at 65,000—to disperse failed to move a hardcore group of about 5,000 people, who taunted police and began throwing bottles at officers and concert staff. At 9:30 p.m., a line of approximately 100 state troopers and Boston police officers formed a human wedge and drove the crowd out of the Esplanade and into the Back Bay. Calm was restored by 10 p.m. More than 50 people were arrested and roughly 50 more were treated for minor injuries—from sprains to drug overdoses—suffered during the concert and the hour-long fracas between police and the crowd, police and medical personnel said."

This author had planned to attend the concert, but a friend could not go at the last minute and I fortunately skipped it. After the concert was canceled, moshers got extremely violent, and threw bottles at police. The crowd reportedly started chanting "Hell no, we won't go! Pigs Suck!" People were pressed up against the barricades, and it's amazing that more attendees were not injured. The violence spilled into the Back Bay District for a while, with further reports of vandalism.

Some young people suggested police brutality, but it's more likely they exercised extreme constraint. In comparison, after a 2004 World Series win by the Red Sox, rioters were shot with rubber bullets, and a young woman was killed as a result.

In general, FNX and the MDC should have never booked Green Day. Acts of mayhem provide great publicity for upstart bands. Green Day, Offspring, Rancid, or Soundgarden are a sample of bands incongruent with the Hatch Shell venue back in '94 due to their style of music. The album Dookie by Green Day was essentially a large billboard saying, "Let's tear up this place!"

The FNX concerts continued for at least one more summer, as I saw Letters to Cleo there in 1995. This concert was shrewdly scheduled in the afternoon, and the atmosphere was that of a family picnic, with no fear or apprehension of disruptive behavior by fans.

Real Stories of the Highway Patrol