Guy Fawkes was an English Catholic that took part in a failed attempt to kill King James I in November, 1605. The failed coup has been celebrated in England each year on November 5 with bonfires, burning of effigies of Fawkes, and fireworks displays.

In Protestant Boston, during the 1700s, Guy Fawkes Day was celebrated, but quickly became known as Pope's Day. A procession took place with effigies of the Pope, the Devil, and Fawkes, and eventually a bonfire was lit on top of Copp's Hill. By the 1750s, two competing processions took place, with a battle taking place near Dock Square to capture all the effigies. People were often seriously injured or even killed during these clashes. After the Stamp Act was passed in 1765, Fawkes was replaced with an effigy of a tax collector. Pope's Day celebrations were eventually replaced with Fifth of March orations and processions (Boston Massacre Day), and then by Fourth of July celebrations using traditional bonfires and fireworks displays.

Guy Fawkes was known as The Pretender, as he attempted to take the King's authority or pretended to be King.  Today, many social movements use masks of Guy Fawkes as a symbol of protest, but it doesn't completely meld with historical facts.

The following are tips on how to replicate a Guy Fawkes mask using face painting techniques. Face and body painting are a form of art, and can be considered a fashion statement in some circles. 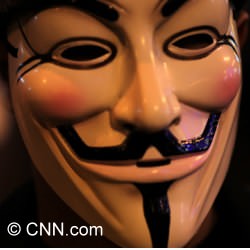 It is surprisingly easy to face paint yourself as Guy Fawkes. Any time you are going to face or body paint you want to be sure to use safe and appropriate products. Face paint, also known as water-based theatrical make-up, can be found in a variety of places. Locally, try costume or party stores. Some arts and crafts stores are now stocking face paints in their children’s sections due to the increasing popularity of the art form. Even though a paint can be labeled as "non-toxic," it doesn’t make it safe for the skin. Avoid using products like tempra or acrylic paints and read all warnings on the label.

You're going to need a light color for the base. White or a very light beige will work fine. The mustache and eyebrows will require some black. A pale pink is great for getting those rosy cheeks. You’ll also need a very light brown to give the face some definition. Don’t forget, if you can’t find the colors that you need, you may be able to mix them yourself. A very small amount of red mixed into your base color can give you the pink you need for painting the cheeks. In addition to the face paints, you’ll need sponges to apply the base and shade the cheeks, and a small brush for painting the mustache, eyebrows and facial lines. You'll also need a small container of water for wetting and cleaning your brush. It's always a good idea to put some newspaper or plastic down on your work surface and have paper towels or baby wipes handy to clean up any mistakes or drips. You'll need to be careful because the makeup can stain, so wear old clothes.

Begin by moistening your sponge, you're going to create the basic outline of the mask over the face. The part on the forehead is basically straight across. The sides follow the contours of the cheeks and extend down to the chin. After you have the outline worked out, use your sponge to fill it in, applying more make-up as necessary. Use small circular motions to keep the make-up from appearing streaky.

When doing the blush on the cheeks, it's helpful to have your model smile so that the cheeks appear really prominently. Again, apply the make-up with small circular motions. Only put the pink on the apple of the model's cheeks. Gently blend the edges into the base color. You can also color the lower lip pink like the cheeks or leave it the color of your base.

After you have painted the basic shape of the face with light-colored makeup, use a fine round brush to outline it with the brown to help create the illusion of it being a mask on top of a face. You will next use the brown to outline the eyes and make the crow's feet. The brown can also be used to accentuate the smile lines that run from the cheeks to the chin. To keep the lines from appearing too stark, right after you paint a line, use a dry brush to blend it slightly.

You'll need to use your brush and black make-up to create the illusion of facial hair. You can go right over your model's actual eye brows for correct placement. Be sure to arch the eyebrows to give your Guy Fawkes mask a proper mocking look.

The mustache starts right under the nose and extends to right underneath the cheeks. As it is composed of straight lines, it is much more angular than a typical mustache. Be sure to notice the inverted ‘v’ shape that the mustache forms right over the center of the mouth. The goatee starts right under the center of the mouth. It's about the same width as the base of the inverted "v" of the mustache above it. The goatee tapers slightly about a half of an inch from the bottom of the lip then flares out a bit before ending in a point.

Enjoy your Guy Fawkes face painted mask at a Halloween or masquerade party, but if you intend on occupying something, be safe.