Massachusetts General Hospital is a world class institution of medicine. The origin of MGH dates to 1799, when a $5,000 bequest was made for the purpose of establishing a hospital at Boston. The original building was opened in 1821. It was designed by the famous architect Charles Bulfinch, and is constructed of fine Chelmsford granite. The building is still used today, and houses specialized offices for the hospital.

The dome atop the original building was an operating room and gallery. More than 8,000 operations were performed in this theater from 1821 to 1868. It is here that anesthetic was first used during an operation. The operating room eventually became known as the Ether Dome due to this very historic event. The Bulfinch Building still stands today at Parkman and North Anderson Streets inside the MGH Campus. The following are excerpts from descriptions at MGH about the famous operation: 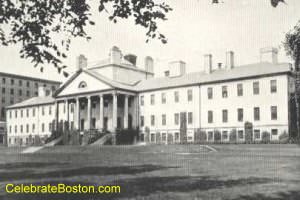 "In the operating theater, on the top floor of Massachusetts General Hospital's Bulfinch Building, one of the greatest moments in medicine occurred on October 16th, 1846. William T.G. Morton, a Boston dentist, demonstrated the use of ether during surgery, ending the indescribable pain—and overwhelming dread—that had been associated with the surgeon's knife.

Using a specially designed glass inhaler containing an ether soaked sponge, Morton administered the anesthetic to Gilbert Abbott, a printer who had come to the Massachusetts General Hospital for treatment of a vascular tumor in his jaw. After several minutes, Abbott was rendered unconscious. John Collins Warren MD, one of the most widely recognized surgeons of that time, then removed the tumor. Upon awakening, Abbott informed the curious and skeptical physicians and medical students in the theater, that he experienced no pain.

News of the discovery spread quickly, and within months it was hailed as the greatest gift ever made to suffering humanity. An item in the People's Journal in London reflected the excitements; the biggest obstacle to surgery had been overtaken, and it was proclaimed, We Have Conquered Pain."

Read a detailed story about William Morton and the events that led to this historic operation. Also, a memorial commemorating the operation is located in Boston Public Garden that is today known as the Ether Monument.