The first post office in America was established in Boston. This centralized mail sorting facility was in the home of Richard Fairbanks. His house was located between Washington & Devonshire Streets just north of Water Street. Modern sources identify his house as the Fairbanks Tavern. It is believed that the tradition from England of dropping mail off at coffee houses and taverns was adopted by the earliest Bostonians. An article in the April 8, 1922 Boston Globe describes the first Post Office:

"The first post office in Boston—and probably in the first in America—was established in the home of Richard Fairbanks, on or very near the site of the [old] Boston Globe building in 1639. On November 6 of that year, the Court voted: 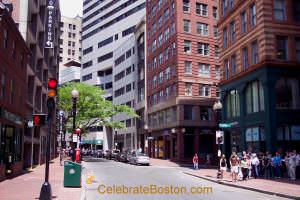 'For preventing the miscarriage of letters; & it is ordered, that notice bee given that Richard Fairbanks his house in Boston is the place appointed for all letters which are brought from beyond the seas, or are to be sent thither, are to bee brought into; and hee is to take care that they bee delivered or sent according to their directions; and hee is allowed for every such letter 1 penny, & must answere all miscarriages through his owne neglect in this kind; provided, that no man shalbee compelled to bring his letters thither, except hee please.' "

Richard Fairbanks was an influential person in Boston, England, and had emigrated to Boston, New England with Reverend John Cotton in 1634. His house also served as a public tavern, and was licensed to sell "stronge water" by the government. The property had a large garden that extended east to Devonshire Street, then known as Black Jack Alley.

A related fact is that the first long distance "pony express" service in America was established between New York and Boston in 1673. The service was short-lived. Interestingly, the path of the riders became known as the Old Post Road, and parts of it was incorporated into U.S. Route 1 more than 200 years later. Also, Benjamin Franklin, a native Bostonian, was appointed first Postmaster General by the Continental Congress in 1775 for the then unborn United States.