Henry Wadsworth Longfellow, American Romantic poet, was born in Portland, Maine, on February 27, 1807, and died on March 22, 1882. Longfellow moved to Cambridge, Massachusetts in December, 1836. He is considered a Fireside Poet, or part of a group of New England authors that wrote material very suitable to be read as entertainment to members of a family, often read aloud in front of a residential fireplace.

The real midnight ride of Paul Revere and William Dawes Jr. was a relatively obscure historic fact until Longfellow published this famous poem in 1863. The steeple on the Old North Church had inspired him to write this patriotic poem at the beginning of the Civil War.

LISTEN my children, and you shall hear
Of the midnight ride of Paul Revere,
On the eighteenth of April, in Seventy-five;
Hardly a man is now alive
Who remembers that famous day and year.

He said to his friend, "If the British march
By land or sea from the town to-night,
Hang a lantern aloft in the belfry-arch
Of the North Church tower, as a signal light,?
One if by land, and two if by sea;
And I on the opposite shore will be,
Ready to ride and spread the alarm
Through every Middlesex village and farm,
For the country-folk to be up and to arm."

Meanwhile his friend, through alley and street,
Wanders and watches with eager ears,
Till in the silence around him he hears
The muster of men at the barrack-door,
The sound of arms, and the tramp of feet,
And the measured tread of the grenadiers
Marching down to their boats on the shore.
Then he climbed the tower of the church,
Up the wooden stairs, with stealthy tread,
To the belfry-chamber overhead.

Meanwhile, impatient to mount and ride,
Booted and spurred, with a heavy stride,
On the opposite shore walked Paul Revere.
Now he patted his horse's side,
Now gazed on the landscape far and near,
Then impetuous stamped the earth,
And turned and tightened saddle-girth;
But mostly he watched with eager search
The belfry-tower of old North Church,
As it rose above the graves on the hill,
Lonely, and spectral, and somber, and still.

And lo! as he looks, on the belfry's height
A glimmer, and then a gleam of light!
He springs to the saddle, the bridle he turns,
But lingers and gazes, till full on his sight
A second lamp in the belfry burns!
A hurry of hoofs in a village street,
A shape in the moonlight, a bulk in the dark,
And beneath from the pebbles, in passing, a spark
Struck out by a steed flying fearless and fleet,?
That was all! And yet, through the gloom and the light,
The fate of a nation was riding that night;
And the spark struck out by that steed, in his flight,
Kindled the land into flame with its heat.

You know the rest. In the books you have read
How the British regulars fired and fled,?
How the farmers gave them ball for ball,
From behind each fence and farmyard-wall,
Chasing the red-coats down the lane,
Then crossing the fields to emerge again
Under the trees at the turn of the road,
And only pausing to fire and load.

So through the night rode Paul Revere;
And so through the night went his cry of alarm
To every Middlesex village and farm,?
A cry of defiance, and not of fear,?
A voice in the darkness, a knock at the door,
And a word that shall echo for evermore!
For, borne on the night-wind of the Past,
Through all our history, to the last,
In the hour of darkness and peril and need,
The people will waken and listen to hear
The hurrying hoof-beat of that steed,
And the midnight message of Paul Revere. 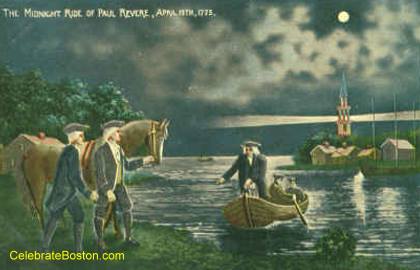