Back Bay District at Kenmore Square

Hotel Commonwealth is located in Kenmore Square, at the west boundary of Boston's historic Back Bay district. The hotel was constructed in 2001, and today represents the elegant focal point of the square.

The five-story hotel offers 148 beautifully decorated guestrooms. The rooms are classified with the names Kenmore, Fenway, and Commonwealth, based on their dimensions and special features. For example, the Fenway rooms have a direct view of Fenway Park. The guestrooms feature European amenities such as marble bathrooms, frette linens, and down duvets. Oversize writing desks, high speed internet access, wifi, voip telephones, and laptop compatible in-room safes, are some of the amenities for business professionals. 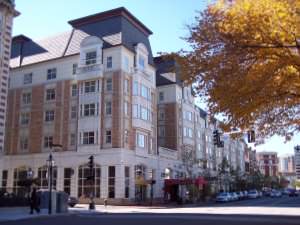 Services offered by the hotel are extensive, with a concierge desk, business center, fitness center, massage service, dvd library, and gift shop, just to mention a few. The hotel also offers flexible meeting spaces and a grand ballroom for conferences or private events. Wedding receptions and other social gatherings at the hotel are extremely popular.

Hotel Commonwealth features two restaurants and a bar. 24-hour room service is also available. Of special note is the promenade mall that occupies the first floor of the hotel. Boutique shops showcase fashionable apparel, jewelry, fine wines, artwork, and many other products.

Construction of the Hotel Commonwealth building greatly improved the aesthetic beauty of Kenmore Square, with attractive street-level storefronts, projecting columns of bay windows (oriels), ascending to an attractive mansard roof. Soon after completion, the surface terminal of the Kenmore Green Line Station in the center of the square was renovated, and represented the final detail in revitalization of the area. During the 1970s & 80s, Kenmore Square was the punk-rock and disco center of Boston, with a nocturnal atmosphere. Completion of the hotel changed the character of the square from a college student rambling spot to that of an upscale shopping area.

There are many attractions near Hotel Commonwealth, including Fenway Park, the iconic Citgo Sign, Prudential Center, Prudential Skywalk, Hynes Convention Center, and Newbury Street shopping area. Just east of the hotel is Copley Place, Copley Square, Public Garden, and downtown Boston. The Kenmore subway station entrance is also in front of the building, which is extremely convenient for accessing the transit network.