Murdered by a Loyalist

On February 22, 1770, a mob surrounded the home of a Loyalist informer, and threw stones that shattered his windows and struck his wife. He eventually fired a weapon from his window into the crowd, and 10-year old Christopher Snider was killed. Tensions in Boston were high preceding the Revolution, and after Snider's murder, the situation further erupted into violence on March 5th with the Boston Massacre event.

Ebenezer Richardson, the Loyalist, was eventually convicted of murder, but was pardoned by the King only two years later. The February 26, 1770, Boston Evening Post, describes the tragic death of Christopher Snider:

"Last Thursday Morning about 10 o'clock some Boys & Children set up a large wooden Head, with a board faced with paper, on which was painted the figures of four of the importers, who had catered into, and violated the Merchants agreement [a boycott of British goods], in the middle of the street before Theophilus Lillie's door, who was one of them. 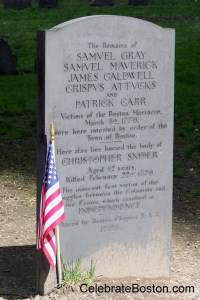 Soon after it was set, Ebenezer Richardson, the famous informer, came by and endeavored to persuade a countryman to overturn it with his wagon; which he refusing he applied to a Charcoal man to drive his Cart against; but he said he had no business with it, and would not concern himself about it.

Richardson (as the Boys say) pressed him to it, saying he was a magistrate in the town, and would bear him out in it: The man still delaying to meddle there with, Richardson laid hold on the horse & oxen and endeavored to shove them upon the pole which supported the pageantry; the cart however passed without disturbing it. Richardson then left the place and came towards his own house at about 50 or 60 paces distant, and meeting with Messrs. Edward Proctor, Thomas Knox, Capts. Riordon and Skillings, faced them in a very impudent manner, & cry’d out, perjury! perjury! often repeating it as he passed them.

The Gentleman halted in the street, till getting within his door, he turned about and again repeated the insult. Mr. Proctor with the other Gentleman step’d towards the door, and asked him what he meant by perjury? He said, I don't mean you Mr. Proctor, but looking spitefully on Mr. Knox, said d—mn you, perjury, villains! Mr. Knox retorted the abuse; on which Richardson said, by the eternal G—d, I will make it too hot for some of you before night!

The Boys on hearing the words began to gather around, and call him informer; on which both he and his wife, or woman, went out and talked to them in a very provoking manner, flourishing their arms, and advancing out into the street, with high threatenings; on which the children would retreat, and an their return, advance, with the squeeling and noise they usually make on such occasions.

This farce soon made a notable diversion in favor of Mr. Lillie, Mr. Richardson and Lady having drawn the whole attention on themselves. The Boys at length began to throw light rubbish of one kind or other, as it to drive them into the house; this the woman often returned, till the matter became more earnest. They then retreated into the house, and speedily Richardson opened the door, and snapp'd a gun presented upon the people indiscriminately. This raised them so much that they then petted the house, and broke some of the windows.

In a few minute after this, Richardson fired out of one of the windows among the people and wounded Mr. Sammy Gore, son of Capt. John Gore, thro' both thighs and two fingers of his right hand, besides which, drove (one would think) a moderate charge into the breast and abdomen of Christopher Snider, a boy about 11 years of age, who lived with Madam Anthorp. The child fell, but was taken up and carried into a neighboring house, where all the surgeons within call were assembled, & speedily determined the wounds mortal, as they indeed proved about 9 o'clock that evening.

The people on hearing the report of the gun, seeing one wounded and another as they thought killed, got into the new brick meeting [house] and rang the bell, on which they soon had company enough to beset the house front and rear; by the latter of which they entered, and notwithstanding the menaces of Richardson & his faithful aider and abettor George Wilmot, seized on both, and wrenched a gun from the latter, heavily charged with powder, and cram’d with 179 goose and buck shot.

'Tis said that some Persons went into Richardson before he fired, and dissuaded him from it, but the event showed he was not to be diverted from his design. The criminals were first carried before Mr. Justice Ruddock, who was pleased to send them to Faneuil–Hall, under a sufficient guard, where three other magistrates Richard Dana, Edmund Quincy, and Samuel Pemberton, Esqrs. with Ruddock took their examination before at least a thousand people, and committed them.

The numberless affronts and abuses both these persons had heaped on the inhabitants, exasperated them to such a pitch, that had not Gentleman of influence interposed, they would never have reached the prison; but to the satisfaction of every good man, they are now in safe custody, where we leave them, to observe, that soon after the Child's decease, his body was opened by Doct. Warren and others, and into were found 11 shot or slugs, about the bigness of large peas, one of which pierced his breast about an inch and half above the midriff, and passing clear thro the right lobe of the lungs, lodged in his back.

Thsi, three of the Surgeons deposed before the Jury of Inquest, was the cause of his death; on which they brought in their verdict, willful murder by said Richardson. The right hand of the Boy was also cruelly torn, whence it seems it have been across his breast, and to have deadned the force of the shot, which might otherwise have pieced the stomach.

Doct. Warren likewise cut two slugs out of young Mr. Gore's thighs, but pronounced him in no danger of death, tho' in all probability he will lose the use of the right fore finger, by the wound received there; much important to a youth of his dexterity in drawing and planting."

Christopher Snider's body was decorated with a pall and a large procession took place from the Liberty Tree. He was most likely buried at Central Burying Ground but his name was inscribed on the marker that commemorates the five men killed during the Boston Massacre.