One block east of Boylston Station (Green Line) and Boston Common, at Washington and Essex Streets, is the site of the famous Liberty Tree. Embedded in the wall of the building located at 630 Washington Street is a tablet marking the spot of the historic landmark, bearing the inscription "Sons of Liberty, 1766."

At the time of the revolution, a great elm tree stood in front of a grocery store here. It had wide spreading beautiful branches, and for many years was the center of business in Boston's original South End. Several large elms grew nearby, and this area was known as the Neighborhood of Elms. 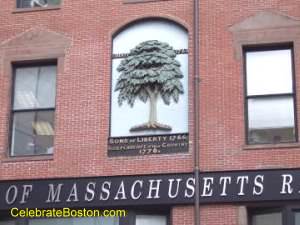 On August 14, 1765, this particular tree was selected for hanging the effigies of those men who favored passage of the detested Stamp Act. On September 11th, a 3.5' by 2.5' copper plate, with large golden letters, was placed on its trunk bearing the inscription The Tree of Liberty. There after, nearly all the great political meetings of the Sons of Liberty, were held in this square. It is believed the early dissenters of British rule, or Sons Of Liberty, had also adorned this tree with lanterns to symbolize unity.

The British made the Liberty Tree an object of ridicule. British soldiers tarred and feathered a man named Ditson, and forced him to march in front of the tree. During the siege of Boston, about the last day of August 1775, a party of Loyalists led by Job Williams, defiantly cut it down.

The Liberty Tree was planted in 1646 and stood for 129 years. Quoting the Pemberton Manuscripts of 200 years ago, at this spot had been "born the first fruits of Liberty in America."

For many years the remnant of the tree was used as a reference point by local citizens, similarly to the Boston Stone, and became known as the Liberty Stump.

There is also a bronze artwork commemorating the Liberty Tree embedded in the side walk on the south side of Boylston Street. The tragic Paramount Hotel gas explosion took place at this location in 1966.