"To classify Emerson is a matter of no small difficulty. He was a philosopher, he was an essayist, he was a poet-all three so eminently that scarcely two of his friends would agree to which class he most belonged. Oliver Wendell Holmes asked:

Where in the realm of thought whose air is song
Does he the Buddha of the west belong?
He seems a winged Franklin sweetly wise,
Born to unlock the secret of the skies.

But whatever he did was done with a poetic touch. Philosophy, essay or song, it was all pregnant with the spirit of poetry. Whatever else he was Emerson was pre-eminently a poet. It was with this golden key that he unlocked the chambers of original thought, that liberated American letters.

Until Emerson came, American authors had little independence. James Russell Lowell declared, 'We were socially and intellectually bound to English thought, until Emerson cut the cable and gave us a chance at the dangers and glories of blue waters. He was our first optimistic writer. Before his day, Puritan theology had seen in man only a vile nature and considered his instincts for beauty and pleasure, proofs of his total depravity.' 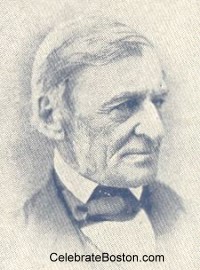 Under such conditions as these, the imagination was fettered and wholesome literature was impossible. As a reaction against this Puritan austerity came Unitarianism, which aimed to establish the dignity of man, and out of this came the further growth of the idealism or transcendentalism of Emerson. It was this idea and these aspirations of the new theology that Emerson converted into literature. The indirect influence of his example on the writings of Longfellow, Holmes, Whittier and. Lowell, and its direct influence on Thoreau, Hawthorne, Chas. A. Dana, Margaret Fuller, G. W. Curtis and others, formed the very foundation for the beautiful structure of our representative American literature.

Emerson was profoundly a thinker who pondered the relation of man to God and to the universe. He conceived and taught the noblest ideals of virtue and a spiritual life. The profound study which Emerson devoted to his themes and his philosophic cast of mind made him a writer for scholars. He was a prophet who, without argument, announced truths which, by intuition, he seems to have perceived; but the thought is often so shadowy that the ordinary reader fails to catch it. For this reason he will never be like Longfellow or Whittier, a favorite with the masses. Let it not be understood, however, that all of Emerson's writings are heavy or shadowy or difficult to understand.

On the contrary, some of his poems are of a popular character and are easy of comprehension. For instance, The Hymn, sung at the completion of the Concord Monument in 1836, was on everyone's lips at the time of the Centennial celebration, in 1876. His optimistic spirit is also beautifully and clearly expressed in the following stanza of his Voluntaries:

So nigh is grandeur to our dust,
So near is God to man,
When duty whispers low, 'Thou must,'
The youth replies, 'I can.'

These are but two instances of many that may be cited. No author is, perhaps, more enjoyed by those who understand him. He was a master of language. He never used the wrong word. His sentences are models. But he was not a logical or methodical writer. Every sentence stands by itself. His paragraphs might be arranged almost at random without essential loss to the essays. His philosophy consists largely in an array of golden sayings full of vital suggestions to help men make the best and most of themselves. He had no compact system of philosophy.

Ralph Waldo Emerson was born in Boston, May 25,1803, within 'A kite-string of the birth place of Benjamin Franklin' with whom he [was] frequently compared. The likeness, however, consists only in the fact that they were both decidedly representative Americans of a decidedly different type. Franklin was prose, Emerson poetry; Franklin common sense, real; Emerson imaginative, ideal.

In these opposite respects they both were equally representative of the highest type. Both were hopeful, kindly and shrewd. Both equally powerful in making, training and guiding the American people

In his eighth year young Emerson was sent to a grammar school, where he made such rapid progress, that he was soon able to enter a higher department known as a Latin school. His first attempts at writing were not the dull efforts of a school boy; but original poems which he read with real taste and feeling. He completed his course and graduated from Harvard College at eighteen. It is said that he was dull in mathematics and not above the average in his class in general standing; but he was widely read in literature, which put him far in advance, perhaps, of any young man of his age.

After graduating, he taught school for five years in connection with his brother; but in 1825, gave it up for the ministry. For a time he was pastor of a Unitarian Congregation in Boston; but his independent views were not in accordance with the doctrine of his church, therefore, he resigned in 1835, and retired to Concord, where he purchased a home near the spot on which the first battle of the Revolution was fought in 1775, which he commemorated in his own verse:

There first the embattled farmers stood,
And fired the shot heard round the world.

In this city, Emerson resided until the day of his death, which occurred in Concord, April 27, 1882, in the seventy-eighth year of his age.

It was in Concord that the poet and essayist, as the prophet of the advanced thought of his age, gathered around him those leading spirits who were dissatisfied with the selfishness and shallowness of existing society, and, who had been led by him to dream of all ideal condition in which all should live as one family. Out of this grew the famous Brook Farm Community. This was not an original idea of Emerson's, however. Coleridge and Southey, of England, had thought of founding such a society in Pennsylvania, on the Susquehanna River. Emerson regarded this community of interests as the clear teachings of Jesus Christ; and, to put into practical operation this idea, a farm of about two hundred acres was bought at Roxbury, Mass., and a stock company was formed under the title of The Brook Farm Institution of Agriculture and Education. About seventy members joined in the enterprise.

The principle of the organization was cooperative, the members sharing the profits. Nathaniel Hawthorne, the greatest of romancers, Chas. A. Dana, of the New York Sun, George W. Curtis, of Harper's Monthly, Henry D. Thoreau, the poet naturalist, Amos Bronson Alcott, the transcendental dreamer and writer of strange shadowy sayings, and Margaret Fuller, the most learned woman of her age, were prominent members who removed to live on the farm. It is said that Emerson, himself, never really lived there; but was a member and frequent visitor, as were other prominent scholars of the same school. The project was a failure. After five years. of experience, some of the houses were destroyed by fire, the enterprise given up, and the membership scattered.

But the Brook Farm served its purpose in literature by bringing together some of the best intellects in America, engaging them for five years in a common course of study, and stimulating a commerce of ideas. The breaking up of the community was better, perhaps, than its success would have been. It dispersed and scattered abroad the advanced thoughts of Emerson, and the doctrine of the society into every profession. Instead of being confined to the little paper, The Dial, (which was the organ of the society) its literature was transferred into a number of widely circulated national mediums.

Thus, it will be seen how Emerson, the Sage of Concord, gathered around him and dominated, by his charming personality, his powerful mind, and his wholesome influence, some of the brightest minds that have figured in American literature; and how, through them, as well as his own writings, he has done so much, not only to lay the foundation of a new literature, but to mould and shape leading minds for generations to come. The Brook Farm idea was the uppermost thought in Edward Bellamy's famous novel, Looking Backward which created such a sensation in the reading world a few years since. The progressive thought of Emerson was father to the so-called New Theology, or Higher Criticism, of modern scholars and theologians. It is, perhaps, for the influence which Emerson has exerted, rather than his own works, that the literature of America is mostly indebted to him. It was through his efforts that the village of Concord has been made more famous in American letters than the city of New York.

The charm of Emerson's personality has already been referred to, ? and it is not strange that it should have been so great. His manhood, no less than his genius was worthy of admiration and of reverence. His life corresponded with his brave; cheerful and steadfast teachings. He 'practiced what he preached.' His manners were so gentle, his nature so transparent, and his life so singularly pure and happy, that he was called, while he lived, 'the good and great Emerson;' and, since his death, the memory of his life and manly example are among the cherished possessions of our literature.

The reverence of his literary associates was little less than worship. Amos Bronson Alcott—father of the authoress, Louisa M. Alcott—one of the Brook Farm members, though himself a profound scholar and several years Emerson's senior, declared that it would have been his great misfortune to have lived without knowing Emerson, whom he styled, 'The magic minstrel and speaker! whose rhetoric, voiced as by organ stops, delivers the sentiment from his breast in cadences peculiar to himself; now hurling it forth on the ear, echoing them; then—as his mood and matter invite it—dying like:

— The Literature of America and Our Favorite Authors, Birdsall & Jones, p.71