"Samuel Adams (1722-1803) was an American patriot, statesman, and political leader from Boston, Massachusetts.

Samuel Adams, born September 15th, 1722, was the son of Captain Samuel Adams, a Boston brewer, who was a wise man and a good citizen. Having been enriched by his trade, Captain Adams was enabled to give his son the best education which the colony afforded. At that time, in Massachusetts, when a man sent his son to college, he generally did so with a view to his entering the ministry; and this was the case with the father of Samuel Adams. But the youth having been drawn away from theology by the superior charms of politics, he disappointed his father, and chose another career.

While he was in college the events occurred which first drew his attention to the great loss and inconvenience which the American colonies suffered from their connection with Great Britain. 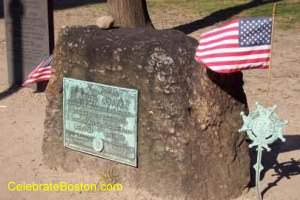 When he graduated, the subject which he chose for his oration was: —

'Whether it be lawful to resist the supreme magistrate, if the Commonwealth cannot be otherwise preserved?'

He maintained that it was lawful, and he enforced his opinion with something of the boldness of later years. Upon leaving college, he entered the counting-house of a merchant; but it soon appeared that ho had no talent for business, and he was continually drawn away from his desk by the keen taste he already had for political discussion.

Consequently, he soon abandoned the pursuit chosen for him, and his father lent him a thousand pounds to set up in business for himself. He was as unfortunate in promoting his own fortunes as he had been inefficient in the affairs of another. He trusted a friend to the value of one-half his capital, and this friend, soon after, meeting with misfortunes, he never demanded the debt. Other losses followed, which left him penniless. He now joined his father in the management of the brewery, and he remained thenceforth a brewer as long as he had any business at all. The great occupation of this man's life was politics, and he devoted himself to the affairs of the public with far more zeal and energy than men usually infuse into their own business. We have never had in America a more consistent and hearty republican than he.

'He that despises his neighbor's happiness,' wrote he, at the age of twenty-six, 'because he wears a worsted cap or leathern apron, — he that struts immeasurably above the lower size of people, and pretends to adjust the rights of men by the distinctions of fortune, is not over-loyal.'

From this remark, the reader can judge something of the spirit of the man, and in that spirit he lived and labored from his twenty-first to his eighty-second year. After holding such small offices as selectman, school-visitor, and tax-gatherer, we find him elected a member of the Legislature of Massachusetts, to which body he was annually re-elected, from 1765 to the period of the Revolution. It is difficult, in the compass of a single article, to convey to the reader's mind any adequate idea of the services rendered by this man in preparing the way for a successful resistance to the tyranny of the English king. We may approximate the truth, perhaps, by saying that he was to the independence of his country what Wendell Phillips has been, [in the 1850s], to the abolition of slavery.

Adams, however, was not an orator only. The weapon which he wielded with most vigor and success was the pen. Every measure of aggression elicited a vigorous remonstrance in the public press from his indefatigable hand. He wrote so much in the newspapers, during the fifteen years preceding the Revolution, that his collected works would fill many large volumes, and his biographer gives us a list of no less than twenty-five names employed by him to conceal the authorship' of his productions. He not only wrote himself, but whenever he noticed a young man of spirit and talent, he sought him out, infused into him his own fire, and urged him to use his talents in forming public opinion against the aggressions of the king. Three of his pupils are still illustrious in the memory of their countrymen, — John Adams, John Hancock, and Samuel Warren. Whoever faltered, this man never did. He said once, at a period of reaction, when he was censured for his persistency in the cause: —

'I am in fashion and out of fashion, as the whim goes. I will stand alone. I will oppose this tyranny at the threshold, though the fabric of liberty fall, and I perish in its ruins!'

On that memorable occasion, in 1770, when the people of Boston solemnly determined that the two regiments of British troops should be removed from the town, Samuel Adams was their spokesman. The acting governor of the colony was in the Council Chamber with twenty-eight Councilors, the Senate of the Colony, seated at the board. By the side of the governor was the lieutenant-colonel in command of the royal troops.

Into this room came Samuel Adams, at the head of a committee of the people of Boston, who communicated to the governor the unchangeable resolution of the citizens, that the troops must be withdrawn.

'Nothing,' said he to the governor, 'will satisfy the people but the total and immediate removal of the troops.'

The governor intimated that one regiment was to be removed, and then said, in a whining tone: —

'The troops are not subject to my authority. I have no power to remove them.'

Then Samuel Adams, with fire flashing from his eyes, stretched forth his arm and said, as he gazed into the governor's face: —

The hireling tyrant cowered before the honest, indignant citizen. Samuel Adams said afterwards: "If fancy deceived me not, I observed his knees to tremble. I thought I saw his face grow pale (and I enjoyed the sight) at the appearance of the determined citizens, peremptorily demanding the redress of grievances. "He had the pleasure of returning to the meeting, and informing his fellow citizens that the troops should be removed from their town on the following day. Samuel Adams was the man who, more than any other, induced America to refrain from importing or using British goods until the Stamp Act was repealed. He was the man chiefly instrumental in causing the destruction of the tea in Boston Harbor. Above all, he was the originator of the Congress of the Colonies, which met at Philadelphia. It was he also who, more than any other man in Massachusetts, created the public opinion which sustained these measures. As the late Edward Everett once remarked: —

'The throne of his ascendancy was in Faueuil Hall. As each new measure of arbitrary power was announced from across the Atlantic, or each new act of menace and violence on the part of the officers of the government, or of the army, occurred in Boston, its citizens — often times in astonishment and perplexity — rallied to the sound of his voice in Faneuil Hall; and there, as from the crowded gallery or the Moderator's chair, he animated, enlightened, fortified, and roused the admiring throng, he seemed to gather them together beneath the aegis of his indomitable spirit, as a hen gathereth her chickens under her wings.'

'Why,' asked one of the English Tories of the Tory governor of Massachusetts, — 'why hath not Mr. Adams been taken off from his opposition by an office?'

To which the governor replied: —

'Such is the obstinacy and inflexible disposition of the man, that he never would be conciliated by any office whatever.'

This was indeed the truth. His daughter, who long survived him, and with whom living persons have conversed, used to say that her father once refused a pension from the British government of two thousand pounds a year. Once, when a secret messenger from General Gage threatened him with a trial for treason if he persisted in his opposition to the government, and promised him honors and wealth if he would desist, Adams rose to his feet, and gave him this answer: —

'Sir, I trust I have long since made my peace with the King of kings. No personal consideration shall induce me to abandon the righteous cause of my country. Tell Governor Gage it is the advice of Samuel Adams to him no longer to insult the feelings of an exasperated people.'

At that time the whole property of this illustrious patriot was the house in which he lived, and a little land about it, and his whole income was ninety pounds a year, which was the amount of his salary as clerk to the Assembly.

When he had wrought up the people to the point of sending representatives to a general congress, he himself was one of its members, and he continued to serve his country during the Revolution with all the zeal and energy which had marked his conduct in his native State. When the war was done, and his country was free, he went home to Boston and had not a place to lay his head. His house had been ravaged and plundered by the British troops, and it was with very great difficulty that he gathered together the requisite articles of household furniture. Sometime after, however, the premature death of his son, Dr. Adams, put him in possession of a competent estate.

During the last years of his life, when the conflict raged between the Federalists and Republicans, he espoused the Republican side, which exposed him to so much obloquy, that it was with great difficulty that he was elected to so unimportant an office as lieutenant-governor of the State. Finally, he was elected to the governorship, and even received a few votes in 1796 for the presidency. When Mr. Jefferson came into power, in 1801, that great man wrote a most beautiful and touching letter to the Republican patriarch, recognizing his great services, and assuring him that the chief of the Democratic party was fully alive to their value.

He died in October, 1803, aged eighty-two years. Party spirit ran so high in Boston at that time, and the Republicans were so odious, that it was with considerable difficulty that his friends could induce the authorities of the State to pay to his remains the funeral honors usually accorded to those who have held high office. Boston, a city which many persons suppose to be dangerously infected with what are called "radical ideas," [was], in reality, one of the most "conservative" communities in the world. In fact, all communities are conservative. It is only individuals who are radical, although sometimes, for short periods, great men of that stamp rule the communities to which they belong, and in which they are generally hated or feared.