A crowd of about 100,000 people attended the 2009 EarthFest at the Esplanade. Thousands of families had a great time at this earth-friendly, kid-friendly annual event.

After nearly a week of overcast skies and rain, spring conspicuously prevailed for the EarthFest, with beautiful bright sunshine, and just the right amount of clouds. The Hatch Shell lawn was loaded with families, college kids, and concert lovers. The atmosphere was festive and cheerful.

The big attraction was the free concert featuring Shawn Mullins, Seven Mary Three, The Lemonheads, and Soul Asylum. Crowds cheered for all performers. The Lemonheads sang their hits It’s A Shame About Ray and Down About It as well as other songs. Soul Asylum performed their hits Black Gold and Runaway Train in their music set. Local bands were also represented, including Red Summer Sun. 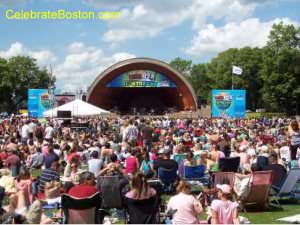 A separate area and stage called Kids Planet was set up especially for younger attendees. Sarah Wheeler and Little Groove, Michael & Marisa, Bravo Brothers, and Zumix presented pleasing performances. Goodies and souvenirs were given to children including orange backpacks and blue beach-balls. It was great to see innumerable boys and girls having a great time at the festival; kids dotted the landscape everywhere with big bright smiles and those little orange backpacks.

Sponsor and activity booths were constructed in the area adjoining the Hatch Shell lawn and on the island that parallels the Esplanade. Event sponsor Whole Foods Market set up a large products display tent as well as many other exhibits. Health-friendly products such as whole-grain snacks and organic fruits and vegetables were detailed at the gathering. Earth-friendly products including building materials, renewable energy equipment, motor scooters, and recycle programs were also showcased at the event.

The 2009 EarthFest was a tremendous success. Thousand of families and young adults had a great time celebrating health-conscious foods, eco-friendly products, and the good life itself. CelebrateBoston would like to thank the major event sponsors for hosting such a family-friendly festival for the City of Boston: