The Berkeley Building is a twenty-six story office tower located in the Back Bay. It is also known as the Old John Hancock Tower, because it was the location of the headquarters of the John Hancock Life Insurance Company from 1947 to 1977. The company moved to the famous glass tower in 1977.

A 65-foot high mast and beacon rests atop the Berkeley Building. The total height of the tower is about 495 feet from ground level. The beacon displays bright red and blue lights that can be seen for miles away on a clear evening. 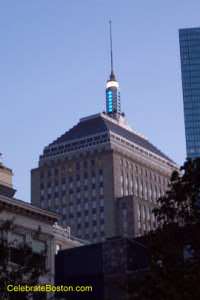 The beacon lights are color-coded, and broadcasts the weather forecast:

During baseball season, a flashing red light signals that the Red Sox game had been canceled due to unfavorable weather. In October 2004, both red and blue flashed for the first time when the Red Sox won the World Series after more than 80 years in duration.

The Berkeley Building is a Boston landmark, and dominated the Back Bay skyline until 1964 when the Prudential Building was completed. The Berkeley weather beacon and the gigantic Kenmore Square Citgo Sign are visual Back Bay book ends.

One of the most attractive cityscapes of Boston's Back Bay can be viewed from the Longfellow Bridge (at the foot of Cambridge Street) during summer time. At dusk, the orange sun reflects off the Berkeley Building, Hancock Tower, and Prudential Building, with the famous Citgo Sign flashing the bright red and white logo from the west. 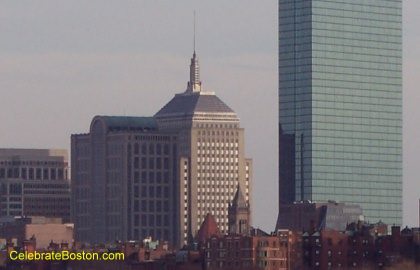