The EarthFest keeps getting bigger and better every year, and the most family-friendly major event at Boston’s Hatch Shell. The weather was near perfect for the festival, which took place on May 22, 2010. EarthFest attendance has been steadily increasing for years, with many repeat visitors. Several EarthFest 2009 T-shirts were spotted, as well as a comment exclaiming "This is exactly where we sat last year!"

The line-up of artists for the main concert was Collective Soul, Gin Blossoms, Crash Kings, Marcy Playground. The local Jackson Wetherbee Band performed before 12:00 pm, with the main concert ending just before 5 pm. The children's area performers were Ben Rudnick and Friends, Black Diamonds, Debbie and Friends, as well as artists from Zumix. The age of the crowd was broad, ranging from near newborns to people with their grandchildren. There was a large contingent of college-age folks, but only one exotic Mohawk haircut was spotted. 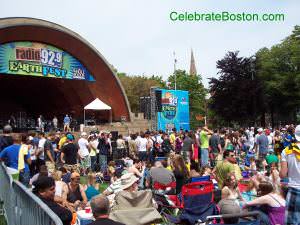 EarthFest has been a very family-friendly event. The Boston Esplanade was divided into distinct areas for the Festival. On the Esplanade island was the Kids Planet area with its own stage, the Whole Foods Pavilion, and the Boston Globe Pavilion.

Opposite the island was the main exhibit area and bike parking lot for those who peddled to the event. And of course the Hatch Shell lawn was packed with those attending the main concert.

There were family support services at Kids Planet including security, emergency medical services, and diaper changing stations. There were lots of baby carriages and blankets in front of the Kids Zone stage, and dozens of children lined up in front of the kid’s activities tent. The Whole Foods Live Demo Tent had a steady flow of guests, with people dotting the island with Whole Foods Market bags from visiting their various exhibits.

The main concert was excellent. Marcy Playground got a large applause for their big hit Sex and Candy. The crowd loved Crash Kings, with people chanting with their song Mountain Man. There also was a few Crash Kings groupies there which was great to see.

The Gin Blossoms really rocked the Esplanade. They performed their many hits including Allison Road, Until I Fall Away, I Will Follow, Til I Hear It From You, Found Out About You, and of course Hey Jealousy. The lead singer, Robin Wilson, spontaneously walked down the ramp from the stage and approached the front of the audience. On the first occasion he climbed atop the fence and walked along it high fiving as many concert lovers as he could. On the second occasion he jumped up and had the crowd sing the main verse of Hey Jealousy. The audience really enjoyed the Gin Blossoms performance. An amusing note is their warm-up recording was God Save the Queen by the Sex Pistols, a classic punk-rock song. This surprised and perked up the crowd before they went on.

Collective Soul really pleased the crowd. Their music is mindful and rhythmic. People very much enjoyed Heavy, The World I Know, and their big hit December. Emphasizing the family-friendly nature of EarthFest, the lead singer, Ed Roland, reflected the nature of the crowd, and talked about his son for a moment. The comments were harmonious with the music of the band, and also of the EarthFest. Collective Soul sang the big hit Shine as their final song. Everyone was standing up at the forward part of the Hatch Shell lawn, with many people singing aloud with them. This author watched members of the band; each of them were very excited about performing, with the drummer noticeably getting into each song.

An amusing note is that an orange mascot ran around the stage a few times celebrating the EarthFest, which was new. The only strange thing about EarthFest are unauthorized pro-green gatherers on the perimeter of the Esplanade; from church-like folk dancing groups to the annual "free hugs" crew.

Shine was the grand finale of EarthFest 2010, and it was a great event and concert. EarthFest continues to grow and remains very family-friendly. EarthFest is sponsored by Radio 92.9 and Whole Foods Market, and their generous support of the community is appreciated.