The Intercontinental Boston hotel opened in 2006 and is located on Boston’s historic waterfront. The facade of this building can be described as sculptured glass, and is a new landmark along the Fort Point Channel. The building is 21 stories tall, with 424 guestrooms and 130 private residences.

The hotel is located at 510 Atlantic Avenue. The Financial District is just across the street from the hotel. This portion of Atlantic Avenue is known as the Rose Kennedy Greenway, named in honor of President John F. Kennedy's mother. The Greenway is the final result of the famous Big Dig, which submerged an obsolete decaying elevated highway into a modern tunnel with great traffic efficiency. 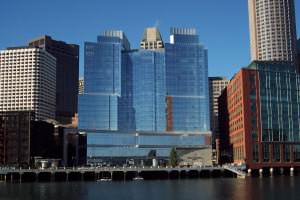 Fort Point Channel is behind the hotel. The walkway along the channel is known as the Boston Harborwalk, and provides quick access to Children’s Museum Wharf, Rowe’s Wharf, and Long Wharf. South Station (Amtrak service) is one block away to the south. The Seaport District is on the other side of Fort Point Channel, so Intercontinental Boston occupies a unique location in the city, with superb access to multiple districts within Boston. The Fan Pier, Institute For Contemporary Art, Boston World Trade Center, Boston Convention Center, and Design Center are located in the Seaport District.

Quincy Market, the Freedom Trail, City Hall, and New England Aquarium are also less than one mile away from the hotel.

From a historical perspective, Fort Point Channel is named after Fort Hill. Fort Hill was cut-down in the mid-1800s, and used for landfill. Part of the hill jutted out into the sea, and hence the name Fort Point. Fort Hill was a good strategic position for protecting the town, and cannons were placed there in the 1600s. The apex of Fort Hill was located approximately where High and Oliver streets intersect today. The site of Griffin’s Wharf, where the Boston Tea Party occurred, is also located near the hotel.