The Boston Park Plaza is an impressive hotel in Park Square. The location of the hotel is unique: To the west is the heart of the Back Bay District, to the east is the Theater District, and just north is downtown Boston. In the 1930s, this area was actually known as uptown, due to its mix of theaters, nightclubs, and neighboring lavish residences in the Back Bay. The Park Plaza was constructed in 1927, and was initially part of the upscale Statler hotel chain.

The hotel is a 15-story multi-towered structure located in the center of Park Square. Originally a huge railroad station occupied the site, allowing the hotel to later become the attractive centerpiece of the square. Of great convenience, there are 10 restaurants or bars that wrap around the hotel on the first story. A total of 60,000 square feet of function space is available at the hotel. The nearby Park Plaza Castle, a former Victorian armory converted to exhibition space, with a Grand Hall and Imperial Ballroom, can also be booked via the Park Plaza. 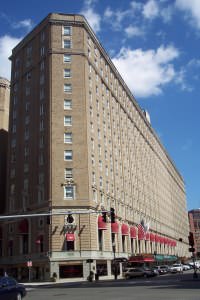 The hotel is just a block away from the Public Garden, with its famous summer Swan Boats. Also, Cheers Beacon Hill, Newbury Street, and Boston Common are a short distance away. Copley Square, a major venue for the First Night New Year's celebration, with Copley Place, Boston Public Library, and Trinity Church, is located only three blocks away down Boylston Street.